I picked up Hello Gen Z because I was feeling rather confused. Who exactly are these Millennials we keep hearing about eating up all the smashed avocado? And whatever happened to Gen Y? 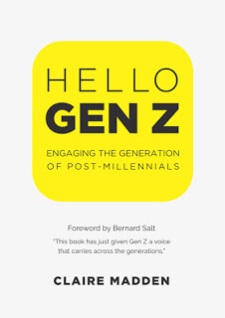 Until I read this book, I thought that Millennials were those born from 2000 on, except I don’t know very many teenagers eating smashed avocado!

Claire Madden is a social researcher and demographer and she clarified the various generations very neatly in the list below.

Mr Books and I are two Gen X-er’s living with two Gen Z’s. I was curious to read what a social researcher thought about the impact of new technology and social media on this cohort of teenagers.

The fascinating thing that struck me straight away though, was that (minus the new technology and social media stuff) I could have been reading about the teenage world of Gen X-er’s in the 1980’s as we battled our Builder parents who wanted to mend, fix and save everything!

Gen Z’s are just as unrealistic, idealistic and hopefully insecure about their future adult lives as we were 30 years ago. The specifics of what they live with and deal with are different to what we had to manage, just as the 1980’s was a different world from that in which the Builder’s grew up in. But grow up you do. Some of that lovely idealism gets lost along the way as you find a way to live a worthwhile, purpose-filled life. You adapt, adjust and change.

7 thoughts on “Hello Gen Z: Engaging the Generation of Post-Millennials by Claire Madden”