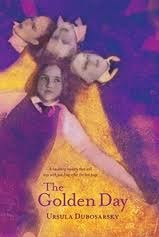 What a curious story is The Golden Day. Set in the 1960’s with a hint of ‘Picnic at Hanging Rock’ about it. A group of schoolgirls are taken on an excursion to the local park by their teacher. She is befriended by the new gardener who encourages them to explore the hidden caves along the beach.
The teacher is full of poetry, longing and dreams. She admonishes the young girls who try to inject practical objections or more realistic ideas into the conversations…. and then she goes missing.
The girls have been told be her to keep their excursions to the park a secret, so they fail to raise the alarm back at school.
What really happened in the cave? Who is the gardener? And what happened to the teacher?
The mystery is well developed. The atmosphere, time and place is beautifully evoked. The angst and indecision of the girls is believable. But the ending was a let down.
The story seemed to be in part a conversation about the perils of being a dreamer and allowing yourself to be carried away (in a way that is unsafe and risky) by your desires and imaginings. So the ghostly ending didn’t sit well with me.
But I’m curious to see more paintings by Charles Blackman and the mood of the story has stayed with me now for several days. Maybe a second reading will be in order…!

When their teacher goes missing during an outing, eleven girls grapple with the aftermath in this haunting, exquisitely told psychological mystery.

The Vietnam War rages overseas, but back at home, in a year that begins with the hanging of one man and ends with the drowning of another, eleven schoolgirls embrace their own chilling history when their teacher abruptly goes missing on a field trip. Who was the mysterious poet they had met in the Garden? What actually happened in the seaside cave that day? And most important — who can they tell about it? In beautifully shimmering prose, Ursula Dubosarsky reveals how a single shared experience can alter the course of young lives forever. Part gripping thriller, part ethereal tale of innocence lost, The Golden Day is a poignant study of fear and friendship, and of what it takes to come of age with courage.