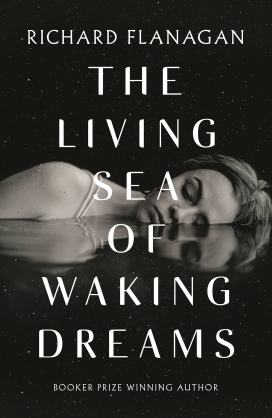 I know there is a lot of love for The Living Sea in Waking Dreams out there already.

It’s not that I didn’t love it, or even admire what Flanagan was trying to achieve, but it’s not easy to read a book where you feel like you’re being smashed over the head, not just with a hammer, but with the biggest, heaviest mallet that Flanagan could find, on every single page, at every single turn. With such a convoluted title, I was expecting more nuance and intellectual word play. Instead I got whack after whack of anger.

Flanagan has a lot to be angry about.

Last summer was ghastly for all of us in Australia. The bush fires were the worst we’d ever experienced. Our skies were grey with smoke and ash for month after month. The smell was inescapable, the heat was oppressive, the news catastrophic. It was easy to feel like it was the beginning of the end. Or the end of the beginning.

There was nothing subtle in his story about vanishing body parts, a dying mother and a world in flames. The ghastly siblings, Anna & Terzo, who refused to let their mother die with any dignity or grace, were so implausible, I struggled to spend my time with them. Their brother, Tommy, was much nicer company and more realistically drawn, as was Anna’s son, Gus. But then, Tommy was the actual carer. He was on hand in Tasmania to care for their ailing mother, while the other two simply jetted in and out whenever there was a problem to be solved. And Gus’ response to a world on the brink of catastrophic climate change is to withdraw into a world of gaming and Youtube videos.

Flanagan ranted several times about social media and smartphone use. Clearly he is not someone who properly understands these online tools. Nothing about the way his characters engaged with their online world actually reflected anyone I know. He had all the right words, but just like Mr Books & I discussing Tiktok or Snapchat or memes with our boys, we show our ignorance at every turn, much to their amusement.

It was an interesting read and an interesting concept, with all the vanishings that nobody noticed, that spoke for, or to, something even bigger and scarier that nobody is noticing either. However I felt no emotional connection to anyone in the story, except pity – a huge amount of pity, in fact – for the undying, lingering, suffering, decaying mother. I found myself talking out loud to Flanagan throughout the book, telling him to get out of the way of his own story.

I love it, though, when I discover the title in the story.

It wasn’t enough for Terzo that their mother had not died. It wasn’t enough that she lived in her sea of waking dreams. In Terzo’s view, she had to live like us, rationally, in a rational universe.

Except of course, Terzo’s world, or his idea of living, were not as rational as he thought.

In the end, though, the occasional insights and beautiful writing were not enough for me to rate The Living Sea of Waking Dreams particularly highly.

It astonished her that he had a view as deeply held felt as hers and yet entirely opposite, and which he held with an equal conviction. And in the face of someone who would not be persuaded by her, she did not seek to see the world for a moment as he saw it but instead was simply angry with him that his world was not her world.

I’m in the process of putting together my best 20 reads of 2020. This one will not make the cut.

To the axe of the spoiler and self-interest fell a prey;
And Crossberry Way and old Round Oak’s narrow lane
With its hollow trees like pulpits, I shall never see again:
Inclosure like a Bonaparte let not a thing remain,
It levelled every bush and tree and levelled every hill
And hung the moles for traitors – though the brook is running still,
It runs a naked brook, cold and chill.

It’s impossible to say how the vanishing began or if it was already ended, thought Anna.

The brilliance of Flanagan’s story and the deep power of this novel is in our witnessing of the end of the world. The death of Francie opens up a black hole in the family drawing Anna, Terzo and Tommy into its implacable singularity.

The Living Sea of Waking Dreams [is] at its best when it balances its vehemence with its beauty, when it leaves space for the reader to wander and wonder – eucalypt leaves swinging down like “lazing scimitars”; a moth thrumming its “Persian rug” wings.

I’ve been trying to take a photo of the beautiful green textured feather design on the hard cover underneath the glossy black dust jacket, that would do it justice. You’ll have to take my word for it. It’s much more interesting than the dust jacket image. The next time you’re in a bookshop, carefully open the jacket and take a peek for yourself.