Gabrielle Carey, with this book about Elizabeth von Armin, had the honour of being the very first author event by zoom, that I participated in during this Covid year. Also in attendance was Lisa from ANZLitLovers, who had alerted me to the event in the first place. It was lovely to be able to wave hello to someone I knew before proceedings started proper. For a thorough account of the author talk, please read Lisa’s post here.

I had not read Only Happiness Here prior to the event, but it was high on my list for AusReading Month possibilities. By the end of the discussion, though, with Jessica White, it had moved up to be next on the pile! As had my desire to read Elizabeth and Her German Garden.

Only Happiness Here refers to the sign that Elizabeth von Armin had over the door of her Swiss chalet. As Carey states in her book, Elizabeth may have been one of the ‘earliest proponents of positive psychology.‘ It was this approach to happiness that attracted Carey. Enough so for her to reread all twenty-one of von Armin’s books before embarking on a trip to the British Library to read her letters and diaries as well.

This is very firmly in the camp of biblio-memoir or bio-memoir. Carey is very much a part of the story, as she rereads the books and interprets what she finds there. It is also her personal search for happiness and peace of mind, as she delves into von Armin’s life, looking for clues or signs on how to be happy.

My quest was about how to understand Elizabeth’s temperament and her way of seeing things, how she maintained such buoyancy, such apparent relish of daily living.

She eventually hits upon nine Principles of Happiness According to Elizabeth von Armin – freedom, privacy, detachment, nature & gardens, physical exercise, a kindred spirit, sunlight, leisure and finally, creativity. Carey developed each principle into a chapter or section that interspersed von Armin’s writing with known facts about her life. Of which, there are not as many as a biographer would usually like.

This was all part of von Armin’s desire to remain very private, and happy. Towards the end of her life, she burned a large number of her ‘notes and diaries in what she referred to as “the holocaust”‘. Which, naturally, leads the rest of us to surmising stuff about how she felt and thought via the actions and words of her characters.

So the first fact many of you may not know about Elizabeth is that she was born in Australia. In the prestigious suburb of Kirribilli in Sydney, to be precise, on the 31st August, 1866. She was christened Mary Annette Beauchamp, and known as May by her family and friends. Her home for the first three years of her life was most likely Beulah House (converted into an apartment block in 1908 and now only remembered by the name of nearby Beulah St and wharf). I’ve said it before, but Australians are hopeless at commemorating the birth places and homes of our well-known authors.

Her father, Henry Heron Beauchamp, came from an artistic, well-to-do family in London. He emigrated to Australia in 1850 to set up a business as a shipping merchant. His business thrived and in 1855 he married Elizabeth Weiss Lassetter (known as Louey). All six of the Beauchamp children were born in Sydney.

One of Henry’s brothers, Arthur, moved with his young family to New Zealand in 1869. His son Harold is the father of Katherine Mansfield, making May and Katherine first cousins once removed. Katherine’s last letter, before her untimely death, was to her cousin May.

In 1870, Henry and his Lassetter brother-in-law, decided to move their families back to the Continent. Enjoying three years in Switzerland together, before settling in London.

As May got older, she kept her Australian heritage very quiet. Any odd accent or ‘twang’ that people noticed in her voice, she would put down to ‘Irish connections’.

Being a ‘colonial’ in class-conscious England was not much fun and could often be a hindrance to making one’s way into good society. Curiously, this slur of the ‘convict stain’ still loomed large in the imagination of many of the Brits that I got to know in the year I lived in London (1991). I imagine that the ‘good-natured’ ribbing I received was a watered down version of attitudes a hundred years prior.

Carey wonders if May’s ‘awareness of her Australianness (was) just another one of Elizabeth’s deep secrets?‘

She married Count Henning August von Armin-Schlagenthin on the 6th February, 1891, effectively becoming a Prussian Countess overnight. She had three daughters in quick succession – Eva (1891), Elisabeth (1893) and Beatrix (1894), after which, the Count was apparently banished from her bedroom…until 1899 when Felicitas was born, then Henning-Bernd in 1902.

At the beginning of 1898, she sent her first manuscript, Elizabeth and Her German Garden, off to the publishers. It was published in September of that year under the pen-name, Elizabeth. After an initial celebratory remark in her diary, the following days were scrawled angrily with ‘rows with H’. May never provided any detail about these rows, which leaves the reader to look for clues in her novels.

If happiness was something she often enjoyed privately, depression was also something she believed should be borne individually….Elizabeth believed that sharing misery only increased the gloom and risked infecting others.

We know some of the basic facts about the less happy times in Elizabeth’s life – the Count’s arrest for embezzlement, the death of Felicitas as a teenager, her fear of ageing, the loss of their family home in Pomerania and Henning’s sudden death in 1910 – but not how May felt about them. Once again, the only clues are in her books when her characters go through similar experiences.

Despite times of depression and sadness, May continued to find joy and solace in nature, especially gardens and appreciating beauty.

The rest of her books where published with the tag ‘by the author of Elizabeth and Her German Garden’ causing a lifetime of supposition and speculation in literary circles, although her friends, like E. M. Forster, H. G. Wells and Bertrand Russell, were well aware of her writing.

I finished Carey’s book with a very strong desire to get to know May better. I will try to source her two more recent biographies, but in the meantime, I will start at the beginning of EvA’s oeuvre with Elizabeth and Her German Garden, which will have the happy coincidence of counting for an #AusReadingMonth title as well as the #NovNov challenge.

Did Carey also find happiness in the end?

The trick, it seems, is to focus on the happy.

Not long after, the lockdown was announced and during the weeks of working from home, I took to having lunch under the frangipani tree. Oftentimes, following my salad and cheese and seeded bread, I stretched out on the picnic blanket, and as the world turned in turmoil, I lay in the dappled sunlight pretending I was Elizabeth von Armin. 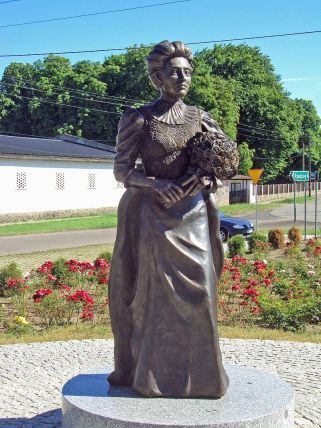