Well, I did it!
My seven-month #slowread of Moby-Dick is officially done and dusted.
If you’ve ever wondered if you should make the time to read this classic chunkster, then I say yea!
And I cannot recommend highly enough the #slowread approach.
Moby-Dick is improved and enhanced by taking your time.

You cannot read this book for speed. It is designed for the long haul, the chapters never too long, naps seemingly built into the text. It is, dare I say, a voyage.

My journey through Moby-Dick has been one of various obsessions.
Early on, I got caught up in articles written to celebrate the 200th birthday of Melville. Why is this book so beloved and so reviled at the same time? Why is it considered so great by so many?

After I started reading, I went off on a Herman Melville obsession. I needed to know as much about the man himself. His life, his purpose, his influences. Biographies and articles were scoured. Who was this man and what were his obsessions? What was he trying to achieve in writing Moby-Dick? What were his demons? Was he Ishmael or Ahab? What was his legacy?

“Melville died in New York on September 28, 1891, blissfully unaware that, in the years to come, so many people would leave the hyphen out of ‘Moby-Dick.”
― Richard Armour, The Classics Reclassified.

Then I got caught up in the religious symbolism.
I had read a lot about his religious background and the number of biblical references through-out Moby-Dick, but I became more and more surprised (and curious) about the growing number of negative comments about Christianity in the book. What was going on here? Was this a personal tug-o-war between faith and how it was practised? What did Melville believe? Was this a crisis of faith? Or was this someone abandoning his strict childhood doctrine for a more modern, scientific, humanist approach to life?

And so, through all the thick mists of the dim doubts in my mind, divine intuitions now and then shoot, enkindling my fog with a heavenly ray. And for this I thank God; for all have doubts; many deny; but doubts or denials, few along with them, have intuitions. Doubts of all things earthly, and intuitions of some things heavenly; this combination makes neither believer nor infidel, but makes a man who regards them both with equal eye.

Themes became my next obsession as I researched all those allusions and metaphors about lines, threads and weaving. The repetition of life, from unknown beginning to unknown end. The Loom of Time. Who was controlling or designing the fabric of life? Which led to digging deeper into fate and destiny and free-will.

Is Ahab, Ahab? Is it I, God, or who, that lifts this arm? But if the great sun move not of himself; but is an errand-boy in heaven; nor one single star can revolve, but by some invisible power; how then can this one small heart beat; this one small brain think thoughts; unless God does that beating, does that thinking, does that living, and not I.

Shakespearean influences captured my imagination next. From the mad fools to the prideful tyrants. Amusing ditties and stunning word-play. The influence on Melville was obvious.

It was a clear steel-blue day. The firmaments of air and sea were hardly separable in that all-pervading azure; only, the pensive air was transparently pure and soft, with a woman’s look, and the robust and man-like sea heaved with long, strong, lingering swells, as Samson’s chest in his sleep.

And, it’s funny.
That’s something they don’t always tell you about Moby-Dick.
So many of the stories and set-pieces are designed to be ridiculous, amusing or ironic. Ishmael is often (unknowingly) hilarious. Pip plays the fool. Stubb and Flask are funny.

Think not, is my eleventh commandment; and sleep when you can, is my twelfth.

However, by the time I reached the end of this epic journey, where we only had 3-4 chapters that actually featured Moby Dick in action, I realised that this was a book all about the journey. It’s about all the stuff we learn about ourselves and the world as we travel through it. It’s about working out our purpose in life. It’s about obsession.

Moby-Dick is full of all that marvellous big picture stuff that you can really mull over, often hidden amongst all the details. And there were LOTS of details. One of Ishmael/Melville’s purposes in life was to gain and show off share knowledge!

Although by the end, we come to understand that Moby-Dick is actually Ishmael’s grief memoir. It was his way to honour the memory of his friends and colleagues who went down with the Pequod.

The advantages of the #slowread were numerous.

It gave me ample time for research, it made the ‘tricky’ chapters easier to digest, and I was able to read other books in and around it.

But the main benefit was how it created a richer, deeper, more immersive reading experience – one that I will never forget. Within that, was those ‘tricky’ chapters. I came to realise that all those tedious-seeming chapters on whale facts were actually a chance for Ishmael/Melville to offer up a bit of life wisdom/philosophy. If I had been doing my usual #fastread I would have missed most of these moments and therefore missed a huge part of the beauty and fascination of this story.

For instance the chapter we were all warned about – Chapter 32: Cetology – finishes (eventually!) with Ishmael/Melville comparing his book on whales to the grandeur of Cologne Cathedral that took centuries to complete,

For small erections may be finished by their first architects; grand ones, true ones, ever leave the copestone to posterity. God keep me from ever completing anything. This whole book is but a draft—nay, but the draft of a draft.

What an undertaking! What a vision! What a colossal insight into the mind of Melville!

Chapter 60: The Line – a chapter seemingly all about rope – finishes with,

All men live enveloped in whale-lines. All are born with halters round their necks; but it is only when caught in the swift, sudden turn of death, that mortals realize the silent, subtle, ever-present perils of life.

Deep, huh? And one of Melville’s favourite themes – are our lives dictated by fate, destiny or chaos? Do we have free-will or choice or is everything pre-determined?

These little zingers sneak into almost every chapter. If I’d been skimming, I might have missed them. And it’s all these little zingers that are at the heart of this story. They give us a peek into Melville’s mind – all his doubts, insecurities and foibles are on show. It feels like he threw everything that he had into this book. Mind, body and spirit – he gave us everything – all his flaws and his magnificence. To take as we will.

Writing this book was an act of courage.

It takes another act of courage to read it. 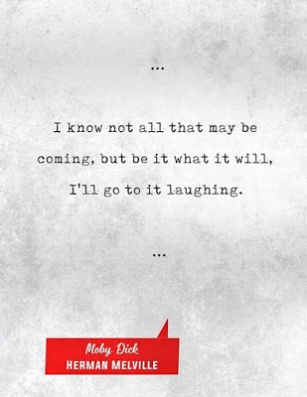 A big thank you to Reese, Rick, Denise, Laurie, Katherine, Ruth, Deb, Lisbeth, Chris, Meredith, Silvia, Fanda, Marian, Sharon and Lisette for your company over the past 7 months. It’s easier to be brave in a crowd.

The linky will stay open until the weekend for any final Moby-Dick posts.

Good-bye, and good luck to ye all – and this day three years I’ll have a hot supper smoking for ye in old Nantucket. Hurrah and away!