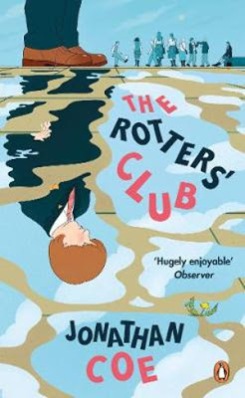 I’m reading Coe’s trilogy about the life and times of Benjamin Trotter the wrong way round, chronologically speaking. But after reading and enjoying the third book in the series, Middle England, so much last month, I knew I had to find out how the whole thing started.

The Rotter’s Club is a 2001 novel set in 1970’s Birmingham and just like Middle England, it is a curious mix of nostalgia and satire.

I thoroughly enjoyed getting to know a teenage version of Ben, Philip and Doug, but I did find their teenage lives a bit tedious by the end of 300 pages. Do you remember those boys at school who did nothing but talk about THEIR (superior taste in) music/politics/sport and how naff you were if you didn’t agree with them? This is a book about them. I suspect Coe was one of those boys, but has come far enough through life, to be able laugh about it now!

Coe celebrates ordinary, comfortable, middle England family life for what it was – a whole generation on the move from their working class backgrounds into more middle class privileges.

The story finishes with a stream of consciousness chapter that is, apparently, the longest sentence in literary history. Along with a number of letters, diary entries and school newsletter articles, Coe plays with text types, mostly successfully, until this last chapter, which felt rather self-indulgent.

A number of reviewers for Middle England mentioned their great love for The Rotter’s Club and that Middle England didn’t quite live up to their expectations. I was the other way around. I suspect these rave reviews were all men, who were once one of those boys who did nothing but talk about their latest amazing new musical find that you really should listen to.

There are some odd moments and writerly devices in The Rotters’ Club that didn’t quite work for me. Using Sophie and Patrick to create a frame story at the start didn’t really go anywhere, which is a shame, as I would have enjoyed getting to know more about the contemporary Sophie/Patrick story as a contrast to the 1970’s story. I also found the IRA bombing cliff hanger annoying as each additional chapter went by that failed to explain, acknowledge or reveal anything about what happened…and there were several such chapters and digressions, before we finally returned to this significant event.

Coe always intended this book to have a sequel, which is no doubt why a number of set-ups and possible red herrings were not followed up or resolved. At least, I hope this proves to be the case.

I enjoyed Coe’s political digs and commentary in both books, however, the immediacy of Middle England, and the adult lives of the characters, appealed to me far more than the 1970’s and a bunch of teenage boys doing teenage boy stuff.

Despite the flaws, I have become quite attached to these books and these boys/men. There is a warmth and affection and a nostalgia that is infectious. I feel confident that The Closed Circle will be on my to-be-read pile very soon.