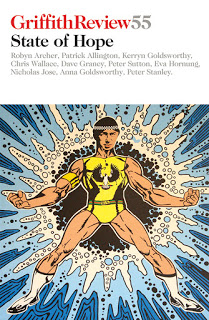 I plan to read Alice Gorman’s Dr Space Junk vs the Universe (2019) in the very near future. Knowing I wouldn’t have time to feature it during this year’s #AusReadingMonth, I decided to search for any other examples of her essay writing instead, to give us all a taste of what’s to come.

Trace Fossils: The Silence of Ediacara, the shadow of uranium popped in the Griffith Review 55: State of Hope | Jan 2017 – an edition dedicated entirely to South Australia. It also appeared on The Conversation: Friday essay | 3 Feb 2017.

I’m rather fascinated by the whole idea of space archaeology (the archaeology of orbital debris, terrestrial launch sites, and satellite tracking stations), which is the field that Gorman lectures in at Flinders University. However, she began her career working on Indigenous stone tool analysis and the Aboriginal use of bottle glass after European settlement, which is where this essay is coming from.

My first question was what are trace fossils? Gorman describes them as – the preserved impressions left by the passage of a living body through sediment.

Wikipedia expanded this by saying that they are impressions or other preserved signs of activity left by animals, plants, protists, and bacteria. These can be tubes, lines, scratches, or other features, like dinosaur footprints or shrimp burrows. They are created in soft sediments and have been found in rocks as far back as the Late Precambrian (2 billion to half a billion years ago).
Apparently South Australia, around the remote areas of Woomera and the Nullarbor Plain, have plenty of trace fossils on offer. This area was once covered by glaciers during various ice ages followed by seas as the glaciers retreated and the earth warmed up. Storm surges caused an influx of sediment that embedded fern fronds and other sea creatures. Segmented worms were squashed, curled up on the bottom of the sea bed.
As Gondwanaland was created these old sea beds were pushed up into mountain ranges.

Which brings us to the Ediacaran Period, a geological period I had never heard of before. It began 635 million years ago and ended 542 million years ago with the Cambrian explosion of animal life. It’s a relatively ‘new’ period, only receiving official status in 2004. Ediacaran fossils were first discovered by Reg Sprigg in 1946 in the Ediacaran Hills, Flinders Ranges. They indicate the earliest forms of complex life on earth.

Gorman provides a very readable, easy to follow potted history of the area to current times. From giant megafauna and Aboriginal life, the arrival of colonists and cattle, the hunt for uranium, a rocket testing range to nuclear bomb testing.

Aboriginal people became a trace fossil in the land deemed empty – hidden in plain sight. Kokatha, Pitjantjatjara, Adnyamathanha and Barngarla people lived on missions around the state, and gathered in coastal towns that offered them the employment that the rocket range had promised but didn’t deliver.

At this time, white Australians thought Aboriginal occupation had been a few thousand years at most, and many believed Aboriginal people were dying out – the inevitable result of the “stone age” being superseded by the “space age”.

Visiting these areas devastated by livestock and human intervention is a sobering experience, yet Gorman is constantly fascinated by the small details, the junk, if you like, that is left behind. Whether it’s a crushed fern fossil from a billion years ago, a twisted coke can in the sand or twisty ties left tied to a fence around a nuclear test site. They all tell a story.

Modern uses for this remote area of SA now include detention centres, farms for giant wind turbines and tourism.

the same apparent “emptiness” that brought rockets, nuclear tests and detention centres now attracts commercial interest in storing nuclear waste from other nations. It’s the end of a cycle that starts with the mining and export of Australian uranium. The redistribution of uranium is a very Anthropocene process, part of the dismantling and reassembling of the planet.

As a long-time fanatic of geology, archaeology, anthropology and evolutionary studies, this tantalising but brief glimpse into the life and times of the desert of South Australia has stirred some dormant microbes of excitement and intellectual stimulation within me.

It’s funny (peculiar) how only last week I was considering my collection of fossil books as a possibility for the Non-fiction November | Be the Expert week. Ever since, I’ve had these vague stirrings of longing to reread the Leakey family bio and the various books on Pompeii, Troy, Charles Darwin, fossils and evolution that I have tucked away somewhere.

Curiously my current fiction read, The Garden of Fugitives by Ceridwen Dovey also has a Pompeian archaeology story strand. Finding Gorman’s Trace Fossil essay was obviously meant to be.

If you can recommend any other books about archaeological digs, fossils or evolution, I would love to hear about them in the comments below.

Favourite Quote: deep time is always waiting to burst through the crusts of the surface.