This past two weeks has been as crazy busy as I predicted, and despite best intentions, I have fallen behind with my Moby-Dick schedule. Today I had a mini-binge read, and I’m now only 4 chapters behind.

I could be using this time to read those four chapters, but have decided instead to finish this blog post. I’m enjoying writing up these mini recaps of the chapters. At first is was to record my experiences, favourite quotes and first impressions. But as my chapter reading has moved ahead of my blogging, the recaps now reflect the foreknowledge of the chapters to come as well as my extra research of the various notes I have made in the margins.

This led me to the discovery of The Beige Moth blog – an entire blog dedicated, chapter-by-chapter to Moby-Dick. Hosted by Robin VanGilder, the blog involves,

chasing down stray biblical and cultural references from the 1840s, examining specific moments in depth, piecing together broad themes. Early on, I got caught up a lot in summarizing the chapter, but I’ve been focusing more on reacting to it lately.

Robin is currently up to chapter 57, so I suspect I will catch up before too much longer, much like the Whale, Whale, Whale podcast, now floundering at chapter 32. Cetology was obviously too much for them to continue!
Or perhaps Moby-Dick is just too big a book to maintain one’s enthusiasm and energy for an indepth discussion of every single chapter (without being paid to do so)!?

My competitive streak has me thrilled that with this post I’ve flown well past the podcasts last episode. And I’m only two weeks away from catching up to The Beige Moth! Whatever it takes, I say, whatever it takes.

But now for my chapters…

Chapter 36: The Quarter-Deck (Enter Ahab: Then, all.)
Chapter 37: Sunset (The cabin; by the stern windows; Ahab sitting alone, and gazing out.)
Chapter 38: Dusk (by the mainmast; Starbuck leaning against it.)
Chapter 39: First Night-Watch – FORETOP (Stubb solus, and mending a brace.)
Chapter 40: Forecastle – Midnight 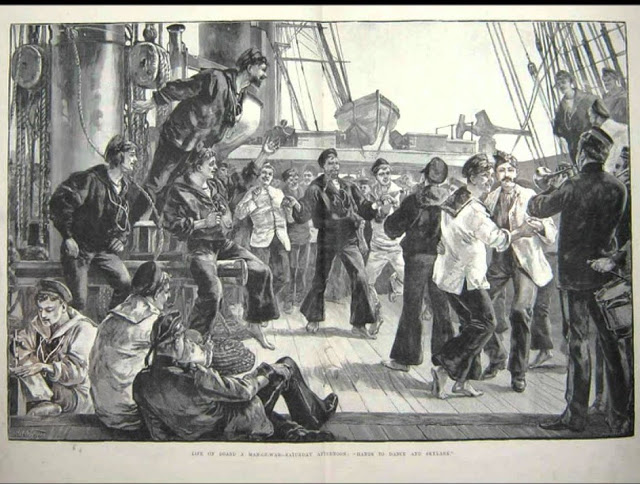 What a fascinating story this is and what a truly curious man Melville must have been. His mind worked in such mysterious, ingenious ways. I’m captivated and astounded with each chapter. What will he do next?
#MobyDickReadalong