Strong in the Rain: Surviving Japan’s Earthquake, Tsunami and Fukushima Nuclear Disaster was not exactly what I was expecting.

Before visiting Japan for the first time last year, I read Richard Lloyd Parry’s Ghosts of the Tsunami. Parry, like his American counterparts, was (and still is) an (English) journalist based in Japan. His book focused on the effects of the tsunami on one small town on the coast where an entire school of children was lost to the overwhelming wave. His book evolved over several years of interviews with survivors and was finally published in 2017, six years after the tsunami.

Strong in the Rain (published in October 2012) was a more immediate response to the disaster of 2011 and focused on the reaction of the government, media and locals to the nuclear threat that teetered on the brink of major catastrophe for days and days and days. 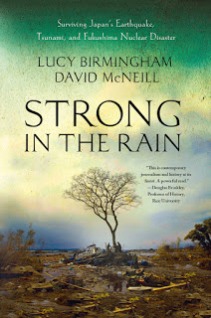 As a result, it was more report-like in structure and execution than Parry’s book which was more personal, and told in a narrative non-fiction style. Both styles have their place and perhaps if I had read Strong in the Rain when it was first published I would have been more engaged with it.

Not that it wasn’t interesting, it just didn’t grab me the way Ghosts of the Tsunami did. That sense of immediacy had passed.

I did learn that the title came from a well-known Japanese poem by Kenji Miyazawa which has been translated below by Roger Pulvers.

Strong in the rain
Strong in the wind
Strong against the summer heat and snow
He is healthy and robust
Free from desire
He never loses his temper
Nor the quiet smile on his lips
He eats four go of unpolished rice
Miso and a few vegetables a day
He does not consider himself
In whatever occurs
His understanding
Comes from observation and experience
And he never loses sight of things
He lives in a little thatched-roof hut
In a field in the shadows of a pine tree grove
If there is a sick child in the east
He goes there to nurse the child
If there’s a tired mother in the west
He goes to her and carries her sheaves
If someone is near death in the south
He goes and says, ‘Don’t be afraid’
If there are strife and lawsuits in the north
He demands that the people put an end to their pettiness
He weeps at the time of drought
He plods about at a loss during the cold summer
Everybody calls him Blockhead
No one sings his praises
Or takes him to heart

That is the sort of person
I want to be

It’s easy to see how this poem could embody the Japanese national spirit, although not so sure about the blockhead part!

Birmingham and McNeill interviewed six survivors in six different areas to personalise the disaster. As you would expect, all their stories were compelling and heart-breaking. For someone who has never experienced that extreme type of earthquake and tsunami in person, it was often hard to fathom the extent of the destruction. But I could admire their courage in resilience in carrying on afterwards.
One of the relief workers talked about ‘post traumatic growth‘ where ‘people have power to face their own grief and gain control of their lives.‘ I first came across this idea in Leigh Sales book Any Ordinary Day and find it encouraging to know that it is possible to not only survive a traumatic event but to ultimately use it as a growing experience.
I learnt a lot about the history of quakes and tsunamis in Japan and the various preparations that the Japanese had put in place – seawalls, breakwaters and floodgates, early warning sirens and action plans – so many of which completely failed.
But it was the total failure of adequate preparation surrounding the Fukushima power plant that Birmingham & McNeill focused on. From the government, to TEPCO (Tokyo Electric Power Company) officials and media outlets that failed to prepare, report or acknowledge what was really happening. Obviously scaring everyone unnecessarily does no-one any good during a crisis, but denying and ignoring the facts could be equally devastating and even life-threatening.
One of the shocking facts that came out of the court case afterwards, was TEPCO arguing that it was not responsible for the radioactive fallout as it didn’t “own” it. “Radioactive materials…that scattered and fell from the Fukushima No. 1 plant belong to the individual landowners there, not TEPCO.“
OMG!! Surely this ridiculous claim was challenged at subsequent court hearings.
The Epilogue went on to provide some information on how various towns were coping with the clean up, preparing new and improved warning systems and commemorating the event. From ocean parks, to cherry tree plantings to mark the high water mark, to elevated housing.
I’d be interested in finding out how things have progressed seven years on. If you know of any more current books on this topic, please leave me a note in the comments.

Jennifer @Holds Upon Happiness posts a lovely Poem for a Thursday each week. This week I snuck my poem into the review!