A couple of weeks ago I listed The Skylarks’ War by Hilary McKay on my post about books read but not reviewed in an attempt to remove the backlog of reviews bogging me down. But I always knew that I would have to return to this book. And thanks to Lenny’s Book of Everything by Karen Foxlee winning the Indie Book Award for Children’s Fiction yesterday and rereading my gushing review, that time is now.

So let me tell you about my journey with The Skylarks’ War.

My rep gave me a lovely looking ARC at the end of last year. He knows of my love for historical fiction, but in the lead up to Christmas it got put on top of the pile by my bed…and forgotten. I confess the blurb, that reveals that this is yet another WWI story, turned me off a little. We’ve been inundated with war stories the last five years and I wondered how on earth something new and fresh could be said about this time.

In January, I then noted that it had not only been shortlisted for The Costa Children’s Award, but had also won its category award. However, it took a hot, hot summer weekend in mid-Feb when I was feeling blah about everything, including all the books I had half-read on my bedside table, that I flicked through my kids TBR pile.

Over the years I have discovered some real gems on the Costa Book Award list, books I may not have turned to otherwise (Pure by Andrew Miller, the author Marcus Sedgwick and Andrea Wulf’s, The Invention of Nature to name a few). So even though this was another war story, I decided it would be light enough to fit my weekend mood.

The first page changed everything though.

More than one hundred years ago, in the time of gas lamps and candlelight, when shops had wooden counters and the streets were full of horses, a baby girl was born. Nobody was pleased about this except the baby’s mother. The baby’s father did not like children, not even his own, and Peter, the baby’s brother, was only three years old and did not understand the need for any extra people in his world….

Clarry was three days old when her mother died. Many things were said about this great calamity, and some of them were regretted later, when people had calmed down and there were fewer tears and more worried frowns in the narrow stone house where the baby had so inconsiderately arrived and her mother had so inconveniently departed.

I quickly realised why this book had won The Costa and was amazed it hadn’t won more – yet.

Clarry, Peter and their older cousin Rupert are characters to take into your heart forever. Told through the innocent childhood eyes of Clarry, McKay is able to tackle some heavy issues. Family dysfunction, bullying, sexism and feminist issues, homosexuality and the hardships of war are all in this book. McKay hints at stuff, leads us up to a point, but she never tells us or explains. She leaves us to work it out and make the connections ourselves, as all the best stories do.

The Skylarks’ War will make you laugh and cry. I found myself hugging it to my chest several times and wondering how many people I could make read this book asap. 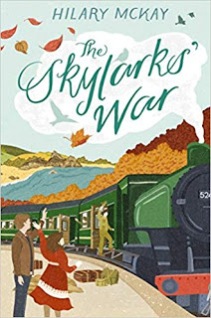 Part of the success of this story is Clarry’s voice. She is believable and feels real.

McKay’s writing is the other big plus. She does not condescend or talk down to her child audience. She writes intelligently and like all the very best children’s writing (think Little Women, Anne of Green Gables, The Hobbit, The Silver Sword, Lenny’s Book of Everything) it is a book that can be read by children and adults alike with an equal amount of pleasure and enjoyment.

The Costa judges described this “as perfect a novel as you could ever want to read.” I think they may have understated just how extraordinary and wonderful this story really is.

McKay includes a bibliography in the back of the book and one of the books that informed the authenticity of this story was Vera Brittain’s Testament of Youth. Enough said really.

The bittersweet heartbreak is there, but so too is the hope.

The Skylarks’ War is a keeper. You should read it now.
You can thank me later.

2 thoughts on “The Skylarks’ War by Hilary McKay”