Eden’s Outcasts: The Story of Louisa May Alcott and Her Father won the 2008 Pulitzer Prize for Biography or Autobiography. I started reading it in 2016. I thoroughly enjoyed the early part – Matteson wrote a very thorough and in-depth look at Louisa’s childhood. But the font was small and things began to get difficult thanks to Bronson Alcott. 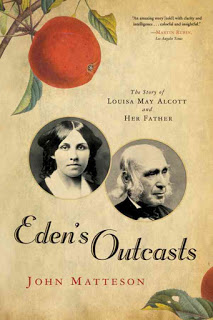 By half way through I had begun to actively dislike him. The family’s time at Fruitland’s was a turning point for me. Bronson’s selfish, grandiose, madcap ideas had HUGE impacts on the rest of his family, who had no choice but to follow along.

My anger at his irresponsible actions, was unreasonable, I grant you, at this distance of two hundred years, but it was there, irrational or otherwise, and enough to stop me reading. For two years! Until the latest CC Spin spun me this book.

After such a long break, the story felt rather stale and I resisted picking it up again, until January. What to do next?
Start again? or pick up where I left off?

I tried picking up where I left off, but found myself a little confused. So I sat down with the first half of the book and all my underlining, to make some notes. I skimmed through and added jot points to this post to help me remember some of the important or interesting to me events.

At this point, I also realised that writing a review for this book was not going to just be about my journey with the book. If after only two years, I had forgotten most of what I had read earlier, then this post was going to have to be a place where I could keep my notes for future reference.

I already knew that this book was not going to be a keeper. I will not be rereading it at any point going forward. It will be passed on to others as soon as this post is finished. But the next time I reread Little Women, I may want to refer to some of the facts and thoughts presented in this bio.

For instance, both Louisa and her father, shared the same birthday, November 29 – 33 years apart and they died in the same year, 1888, not quite two days apart.

It has been suggested that the unyielding asceticism of Louisa’s parents was a harmful force in her personal development. However, it may be argued with equal good faith that the staunchness with which they encouraged her to confront her inner failings was precisely what kept her sane.

I’m glad I pushed through my early dislike for Bronson. He never really outgrew his selfish, thoughtless ways, but there can be no doubt about the love he had for his family and the genuine affection and connection that existed between Bronson and Louisa.

Our families influence us, for good and bad, our entire lives. Our childhood experiences shape the adults we become. Matteson’s biography explores this idea very thoroughly, with oodles of historical detail and recourse to primary sources. As he states at the end, it is impossible for those of us coming after, to know the everyday, unrecorded moments that make up any relationship.

The life written is never the same as the life lived. Journals and letters tell much….But the bonds that two persons share consist also of encouraging words, a reassuring hand on a tired shoulder, fleeting smiles, and soon-forgotten quarrels. These contacts, so indispensable to existence, leave no durable trace.

However, his award winning biography does a magnificent job of showing us everything else.

Susan Bailey has a most impressive blog all about Louisa called Louisa May Alcott is my Passion.