I suspect I’m going to be the lone dissenting voice when it comes to Boy Swallows Universe by Trent Dalton.

This is a debut Australian novel garnering a HUGE amount of attention and rave reviews. In the lead up to our Christmas rush at work last year, this is the book many, many locals were asking for. Customers were returning to tell us how much they ADORED the book and every second book club, including mine, seemed to pick it for their summer holiday read. 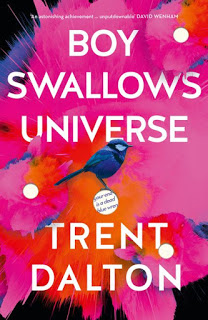 I was thrilled that I was going to have a good excuse to make time for this book and I couldn’t wait to get stuck into it.

To start with what I loved:

However around the 50 page mark, the underbelly criminal stuff started to take centre stage. Drugs, drug running and drug lords took over the story. Because I now suspected that this was based on a true story (I hadn’t googled at this point) I made myself keep reading even though, every single extra sordid drug reference and act turned me off more and more and more.
I’ve always believed that if someone actually had to LIVE through something ghastly, the very least I can do from my safe, white, middle class home, is read about it with understanding and compassion and a huge dose of gratefulness for my very ordinary upbringing.
True crime is not my usual genre, but I have been known to be fascinated by the occasional story. We watched the second season of Underbelly that starred Matthew Newton which was centred around the murder of Donald Mackay in Griffith in 1977, but I haven’t been able to watch any of the other seasons. I also haven’t got into Breaking Bad, The Sopranos or Orange is the New Black.
However, with Boy Swallows Universe, I got to a point, about 100 pages in, where the amazing writing and the affection I felt for the two brothers, wasn’t enough to sustain me through the relentless criminal activity.
I admire Dalton for finding such an incredible way to process the trauma from his childhood. There is so much love for this story ‘out there’, that I’m sure it will pop up in most of the Australian book awards this year. It deserves it too. The praise being heaped on it, is valid, but the content is just not my thing. There are so many books, about topics that I have way more interest in, waiting for me to read them, that I don’t want to give too much time to one of those that just fails to fit the bill…for me.
Boy Swallows Universe has just been shortlisted for the Indie Debut Fiction Book Awards.
I’ve labelled this with the Did Not Finish tag, but it was more a case of skim reading the last three quarters of the book before slowing down to read the last chapter properly.

March update: I gave this to Mr Books to read because I suspected that he would love it. He did.
He felt the criminal activity was within context and didn’t dominate the story. For him, the story of the boys, the search for goodness and what makes a person ‘good’ and the power of redemption were powerful, moving themes.
He was surprised I couldn’t finish it, even though he has had years of watching me hide behind pillows and my hands in violent movies! (We’re rewatching Game of Thrones in preparation for the final season. Because I know what’s coming, I’m spending even more time behind the pillows than I did with the first viewing, when many of the violent/cruel scenes caught me by surprise. I also know to leave the room whenever Bolton walks on screen).