A Maigret Christmas contains three very different stories by Georges Simenon – A Maigret Christmas, Seven Small Crosses in a Notebook and The Restaurant near Place des Ternes – yet they all share a similar sense of melancholy and loneliness. 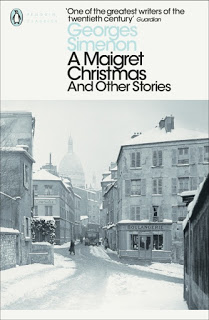 In Simenon’s world, Christmas is not a time for goodwill and cheer, so seasonally well-adjusted readers beware! Instead, in these three stories, we visit long, cold night shifts, suicides and lonely prostitutes. The title story (first published in 1950) is the only one that features Maigret though. The other two are set in his world, his time and his place and provide an interesting backstory or subtext to his other stories.
The descriptions of Christmas Eve in all three were evocative of the season, but the paragraph that has stuck with me is the image of the two Maigret’s carefully avoiding a certain topic all day,

He didn’t feel depressed exactly. It was just that his dream – which he still could not remember – had left him with raw nerves. And anyway maybe it wasn’t the dream but Christmas itself. He was going to have to tread carefully all day, weigh his words, just as Madame Maigret had calibrated her movements as she got out of bed, for she too would be a little more prickly than usual…But enough of that! Don’t even think about it! Don’t say a word that might bring up that subject. And later on, don’t look out on to the street too often when the kids came out of doors and started showing off their toys.

If you love Maigret and his ever patient wife, then this little titbit about their personal circumstances will break your heart. That this particular case involves a young girl, who by the end, will be in need of care and guardianship for a while, is a bittersweet outcome, that sees Maigret saying to Madame Maigret,

“Not ours to keep, no. Just on loan. I thought it would be better than nothing and that you’d be happy.“

Seven Small Crosses was first published in 1951 and first translated into English in 1976. It features Lecoeur, one of the night shift ‘owls’ manning the police control room, taking emergency calls and patching through information to all the stations around Paris.

Lecoeur is hard-working, dedicated and very meticulous. These days he may even be diagnosed with high-functioning autism. A late-night strange set of incidents begins to take on a sinister and very personal meaning when he realises that his young nephew may have witnessed a murder and is on the run. Normally police procedural stories leave me cold, but the personal elements in this one, that were revealed gradually, created a great deal of tension and suspense.

The final, very short story (also referred to as A Christmas Story For Grown-Ups) begins with a suicide and ends with a drunken brawl between a prostitute and a young women attempting to get on the game. The older cynical prostitute guesses what is happening when she witnesses two men slowing getting the young ingenue drunker and drunker in a bar. She intervenes, even though she’s not quite sure why. Perhaps it’s because they come from the same small village outside Paris? Or perhaps it’s because everyone should ‘want to be Father Christmas‘ just once in their life.

‘Just imagine if, once in their lives, everybody behaved like Father Christmas...Just imagine it, right?…Just once…And when you think of how many people there are on this earth…’