And I may just have read my most favourite and best book for 2018.

Sally Rooney has written a gut-wrenching, painfully poignant love story about two young damaged souls that will stay with me for a very long time. In Normal People she has captured perfectly all the angst, insecurity and missteps that dog any young relationship. Especially when the two young people involved are still trying to work out their own issues leftover from their childhood. 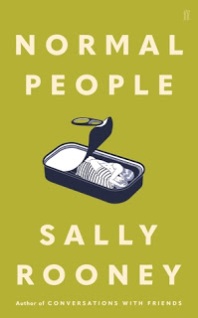 Marianne had the sense that her real life was happening somewhere very far away, happening without her, and she didn’t know if she would ever find out where it was and become part of it.

Rooney explores the misconceptions around ‘normal’ and the anxieties we inflict on ourselves in our attempts to belong, to not stand out from the crowd or to be different. On the outside both Connell and Marianne look like they have ‘normal’ enough family lives. But Connell is being raised by a young single mum and doesn’t know who his father is (his mum has said she he has happy to discuss it with him, but he doesn’t want to know).

Marianne is also being raised by a single mum (and an older brother), but her father died a number of years ago. Her family is wealthy and except for a dad, seems to have it all. Connell’s mum cleans house for Marianne’s family. They avoid each other at school, but strike up intense conversations in Marianne’s kitchen, as Connell waits for his mum to finish.

Connell is one of the popular, sporty kids at school, who hides just how clever he is to fit in. Marianne doesn’t bother hiding how smart she is and doesn’t try to fit in. She actively goes about being different, disdainful and fiercely independent.

Normally, I wouldn’t be drawn to a tortured romance between two YA’s. I had more than enough of that in my own YA years! But this is not your normal YA love story. Rooney gets deep into the heart of this relationship. She teases out each painful nuance and she takes you on this emotional journey that feels very real and very authentic.

We soon learn that Marianne’s dad was a violent, unpleasant man. Her mother and brother have dealt with their pain around this by identifying with the perpetrator. They now give back a weird, messed up mix of psychological and physical abuse to Marianne, the only one who has rebelled against this way of living a life.

And as time goes by, we realise just how insecure and anxious Connell really is once he leaves his home base to go to uni. Spending his childhood trying so hard not to stand out, now means that he doesn’t know how to stand on his own two feet in the bigger world.

This is a torturous journey, a train-wreck at times, but I couldn’t put it down. I cared for both of them, even as I wanted to shake them into perfect understanding. All those things unsaid, assumed and misspoken that so often plague young love (and many older loves that I know) are explored in agonising detail. My heart is broken, but there is hope.

Normal People deserves the buzz it’s getting. We all need to be reminded, at times, how important it is to tell those we love how we really feel.