This is one graphic novel that really packs a punch.
The Complete Maus by Art Spiegelman is one man’s journey to understand what happened to his father during WWII. It’s obvious from the opening pages that what happened to Vladek during the war had a huge impact on everything that came after. His marriages, his relationship with his son, Art, as well as having deep, abiding influences over Art’s life to this day. 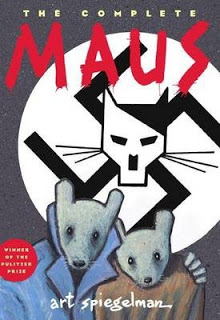 Art began his cartoon in 1980. It was serialised in Raw, an avant-garde comic magazine published by Art and his wife, Françoise Mouly, until 1991. The comic reflects conversations that Art began having with his father in 1978 about his war experiences. The story moves between these events and the modern day, where we see Art & Vladek’s troubled relationship play our during their meetings.
There is a lot of sadness and unhappiness in this story.
Near the beginning of this story (in a story within the story) we learn that a teenage Art had spent some time in a mental health facility. Art’s mother then committed suicide when he was twenty.
Vladek and Anja were married before the war and had a young son, Richieu, who died during the war. Vladek and Anja survived the Polish ghetto as well as their time in Auschwitz and Birkenau, before eventually moving to Sweden (where Art was born in 1948) and then in 1951 emigrating to the States.

Spiegelman uses animals as a kind of metaphor throughout.
The Jews are mice, the Germans cats, the Polish are depicted as pigs (which created a controversial reaction when the book was translated into Polish in 2001) and the Americans are dogs. In a humorous meta-fiction moment in the story, Art and his wife are discussing how he should draw her as she is French. Should she be a frog? Françoise suggests a bunny rabbit, until they agree that since she converted to Judaism she should also be a mouse. I suspect there are whole websites, papers and articles dedicated to unpacking the meaning behind all of this, but I’m too tired to search them out right now! However, I did read that Art once said that using animals “allowed me to approach otherwise unsayable things.” (MetaMaus: A Look Inside a Modern Classic, Maus)
The Complete Maus contains two parts.
Part I: My Father Bleeds History was first published in 1986, four years after Vladek’s death. This part ended with Art walking away angrily from his father after learning that Vladek had destroyed all Anja’s diaries and letters after her death when ‘one time I had a very bad day‘.
Art finds it hard to forgive his father for this act of destruction.
Part II: And Here My Troubles Began shows Art struggling to come to terms with his newfound fame thanks to the publication of Part I. He has a young family and is obviously still trying to manage his own depressive episodes.
Both Art and his father suffered from versions of survivor guilt, with Art not only living with his own memories but the stories of his parent’s memories as well. The ghost memory of his brother, Richieu haunts him as well. Part II is dedicated to him, along with Art’s own children, Nadja and Dashiell. (I read Nadja’s memoir I’m Supposed to Protect You From All This a couple of years ago – it was one of the best memoirs I’ve read in a long time.) 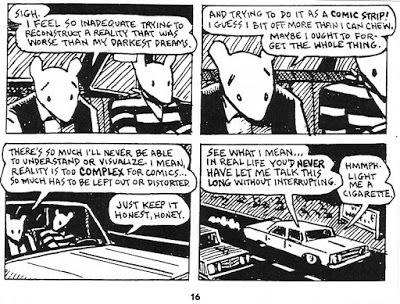 This Pulitzer Prize winning book is not an easy read or a comfortable one, but if you only ever read one graphic novel in your lifetime, make it this one.
It’s emotionally rich and complex.
The simple drawings convey so much emotion by the end, that I defy anyone to be left unmoved by the final page of the book. But it’s Vladek’s words that are at the heart of this story. Despite their complicated relationship, Art allows his father’s words to stand. He bears witness to Vladek’s story in an attempt to find meaning in something that is beyond understanding.

12 thoughts on “The Complete Maus by Art Spiegelman”