Last week I indulged in a little walk down the red carpet with Jane Austen. I quickly realised it was going to take more than one post to adequately explore my love affair with Austen on the screen. The Pride and Prejudice adaptations were so numerous and I found I had so much to say, that I feared I would have to do the same for all of Austen’s books! But when I sat down to think about which movies I had actually seen, I realised that I had only seen one or two versions of the other books. So today is all about Jane on screen minus P&P.

After my first reading of Austen’s books in my teens, Emma and Mansfield Park were my least favourite books. Emma was too annoying and Fanny was too nondescript. The romance wasn’t as obvious as it was in Pride and Prejudice either, and during my teen years, it was all about the romance!

However my view of Emma changed completely when I saw the 1996 movie starring Gwyneth Paltrow and Jeremy Northam for the first time. (Note the strategic use of the word ‘first’ – I have now watched this movie more times than I can remember!) 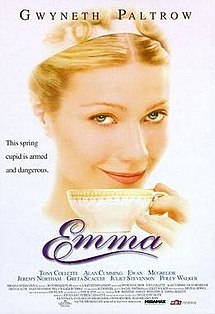 Douglas McGrath’s lively, endearing take on this rather annoying, manipulative young lady hooked me in, along with his other brilliant casting choices. When I first read Emma at 17, I dismissed Mr Knightly as being ‘too old’ and therefore not worthy of my romantic considerations. Jeremy Northam’s charming, thoughtful, generous portrayal of Knightly changed all that. A reread of Emma not long after my first viewing of this movie, revealed that I had been fooled by Emma’s own descriptions and beliefs as she professed them, early on in the book. During a more observant reread Emma’s flaws and misconceptions are easier to discern. But don’t get me started on the joys and merits of rereading Jane Austen!

Toni Collette played the ingenue Harriet Smith a little self-consciously, but since Harriet is meant to be self-conscious and lacking in self-confidence it worked. Sophie Thompson’s Miss Bates was truly inspired. She captured her silly, dithering nature but also the kindness and heart behind this lonely woman. Ewan McGregor’s Frank Churchill was played beautifully too. The scene where he and Emma are singing a duet is hilarious every single time, just like the scene where Emma is nasty to Miss Bates hurts every single time. Mr Knightley’s “badly done, Emma, badly done!” almost reduces me to tears as my own ‘badly done’ moments come flooding back to haunt me.

And that is exactly why Jane Austen is still so relevant today. Her characters may be wearing old time clothes and speak in an old fashioned manner to our modern sensibilities, but her characters behave and act in very familiar ways. Her characters have that unmistakable ring of authenticity as we recognise ourselves and those we know between the pages.

I have yet to see the Kate Beckinsale TV version of Emma from the same year, the 1972 or 2009 BBC series either – it’s nice to have something to look forward to.
Modern adaptations can be ghastly experiences for those of us who truly adore a book, but sometimes everything conspires for the good. Clueless was one of those times when they got it very right.

Alicia Silverstone’s modern day Emma (Cher) makes it obvious what JA was trying to say about youth and privilege and our ability to bend and twist reality to suit our own purposes. The movie highlights Emma/Cher’s innocence and her ego. Cher teeters from lovable to loathsome and back to lovable again, and in Clueless we see Emma for the coming of age story that it actually is.

I avoided all Mansfield Park screen versions until this year. Only a few short years ago MP was still my least favourite Austen and the thought of watching sappy Fanny on screen for 2 hours was more than I could bare! But the reread changed everything. I suddenly saw (if you can call the 20 years of life and reading experience that led to this change, sudden) the incredible structure and beauty of Austen’s craftsmanship. I had completely failed to see or appreciate the technical brilliance of MP the first time and I had completely failed to see or appreciate Fanny for who she really was.

Sadly Frances O’Connor also failed to appreciate Fanny for who she really was back in 1999 when this movie was made. At the start, the director clearly states that the movie is only ‘based on the novel of the same name’. He went on to include a lot more about slavery and plantation life than JA ever would (even though she had very strong opinions about them in real life – but that’s another post). All of which is fine, but Fanny is shy and reserved and timid. She is self-conscious and fearful and lacks a sense of belonging. O’Connor plays Fanny with far more energy, confidence and sass than Fanny could ever dream of – perhaps more appealing to a modern audience, but completely changing the story arc for Fanny. Instead of being a journey towards belonging and morality and learning to stand up for herself, we have this particular Fanny doing the same things at the end as she did at the beginning. There can be no story arc for this Fanny who has way too much pluck to belong here!
There is also an earlier BBC TV series of Mansfield Park to watch out for, but everything I’ve read suggests that MP is still due for a good screen interpretation.

The 1986 Northanger Abbey movie is the only on-screen version I’ve seen. It has attracted a lot of haters over the years, but I loved it. It captured the silly, romantic, gothic fluff that I believe Austen was aiming for. A lot about this novel is written tongue-in-cheek and this particular screen version embraces the parody with gusto!

Eerie music oozes over every scene, fog and mist cast shadows and mystery everywhere and all the characters a stereotypes, beautifully drawn, from the doe-eyed ingenue, the sexually aware BFF, the hoon brother and the amused romantic hero. It’s delicious. Yes, it misses out lots of the details from the book, but all movies have to make that concession. The ones that work for me are the ones that stay true to the characters.

The 1995 Persuasion is another favourite. Amanda Roots completely owned her interpretation of Anne Elliot.

Bath and Lyme feature strongly in this movie too with all the rain, grey skies and chill winds that one would expect. This is one of JA’s most socially conscious novels and the movie goes to great lengths to show this off. Beautiful estates, country homes, naval quarters, inns, sumptuous town apartments and run-down rooms in the poor part of town.
Ciaran Hands played the rugged Captain Wentworth with proper naval aplomb and the scene where our two lovers finally kiss has the added bonus of a noisy, colourful circus passing by with clowns backflipping and jumping for joy in the background.

I’ve never bothered to check out the 2007 version, as this one continues to satisfy me every time.

The same goes for Sense and Sensibility. Ang Lee’s 1995 movie is such a satisfying version of the story that I’ve never felt the need to look elsewhere. 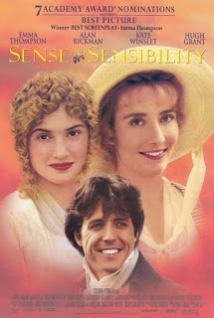 Yes, most of the actors are way too old for their parts, but one can forget and forgive this for their faithful interpretation of their characters. I’ve gone into my feelings about this movie in much greater length before, so I wont go over old ground, except to say that I love the almost final and very emotional scene with Elinor and Edward so very much.
Adaptations and bio-pics are a curious thing. I had such high hopes for Becoming Jane, but was so disappointed to see that apparently all of Jane’s good ideas and lines came from a man!! 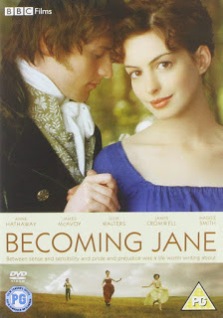 Lost in Austen was far more successful. It was fun with lots of interesting comment about modern life versus Regency life. I’d happily watch this again one day. 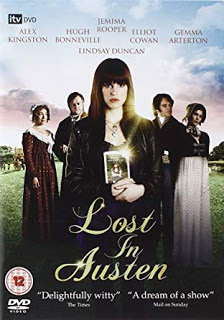 One I have still to see and would really like to, is the recent movie version of Love and Friendship. 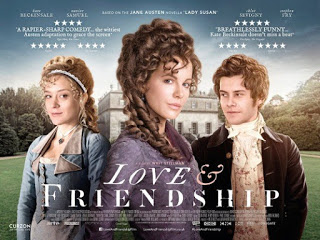 Austenland and Miss Austen Regrets are two I have also been recommended…for one day.
Do you have a favourite JA book or movie or TV series?

12 thoughts on “Austen on Screen Take 2”