A Rightful Place: A Road Map to Recognition evolved out of last year’s Uluru Statement from the Heart. It includes a foreward by Galarrwuy Yunupingu, a long essay by Noel Pearson which gives the book its title, as well as pieces by Megan Davis, Jackie Huggins & Rod Little, Damien Freeman & Nolan Hunter, Warren Mundine, Shireen Morris, and Stan Grant. 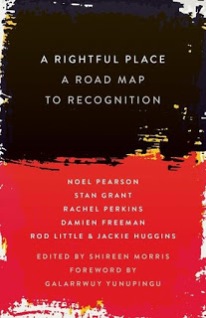 I learnt a lot and have much to mull over thanks to the ideas presented in this book. The written response below is MY journey to understand these important ideas.

I will be quoting and noting stuff that struck me, linking to the places it took me – a book journaling experience more than a critique or review. A resource post more than a response at this point.

My parents gave me the name Galarrwuy, which means ‘the area on the horizon where the sea merges with the sky’.

The clans of east Arnhem Land join me in acknowledging no king, no queen, no church and no state. Our allegiance is to each other, to our land and to the ceremonies that define us. It is through the ceremonies that our lives are created. These ceremonies record and pass on the laws that give us ownership of the land and of the seas, and the rules by which we live. Our ceremonial grounds are our universities, where we gain the knowledge that we need.

My inner life is that of the Yolngu song cycles, the ceremonies, the knowledge, the law and the land. This is yothu yindi. Balance. Wholeness. Completeness.

I have maintained the traditions, kept the law, performed my role – yet the Yolngu world is in crisis; we have stood still. I look around me and I feel the powerlessness of all our leaders. All around me are do-gooders and no-hopers – can I say this? Whitefellas. Balanda. They all seem to be one and the same sometimes: talking, talking, talking – smothering us – but with no vision to guide them; holding all the power, all the money, all the knowledge for what to do and how to work the white world. Only on the ceremonial ground do our leaders still lead – everywhere else we are simply paid lip service. Or bound up in red tape.

Is there a proper and rightful place for the original peoples of Australia in the nation created from their ancestral lands?

of the Australian black man we may say certainly that he has to go. That he should perish without unnecessary suffering should be the aim of all who are concerned in this matter.

when civilised nations come into contact with barbarians the struggle is short.

if we have anything to learn from the Noble Savage, it is what to avoid. His virtues are a fable; his happiness is a delusion; his nobility nonsense….the world will be all the better when his place knows him no more.

the destruction of the Tasmanians occurred in a British colony governed by the British Crown….frontier destruction and protection served the same colonial logic. A logic that envisioned no future for the native peoples.

the progressives reinforced victimhood of the indigenes while their opponents denied their victimisation.

We see our future as living in two worlds and moving between each: the Aboriginal world and the wider world.

more recently we have seen a proliferation of well-intentioned positive discrimination – benign in intent, but still harmful to our individual liberty and thus to our personal responsibility.

In Australia, Indigenous peoples have not been allowed to make their own choices about how to reconcile their cultures with the demands of development.

Today we understand there are no distinctions to be made among peoples on the basis of race. We are a human race. While we do not share a uniform culture, language, religion and ethnicity, we do share one characteristic: we are members of a single race.

There has been no treaty, though our people have repeatedly asked for one. Mutual goals have never been articualted. A shared vision for our country and the place of Indigenous peoples within it has never been agreed.

We don’t seek to harm Australia: we seek to make a better country for all of us.

With this pledge we recognise we are all Australians,
Aboriginal and Torres Strait Islander peoples,
Whose heritage, culture and language we cherish
and enduring connection to land and waters we respect,
The first European settlers that followed
Whose institutions and traditions we preserve,
The generations of migrants from across the seas
Who come to contribute to our shared future,
Built on a liberal democracy that binds us as equals,
With mutual respect and responsibility for each other
For a free, fair, just and united Australia for all.
We pledge our loyalty to Australia.

While story grapples with timelessness, with ambivalence and ambiguity, we live in a land of laws, and the law demands certainty. If the First Peoples are to have justice, it must truly be acknowledged at law….But I would argue that we seek something more, that we write a declaration of our nation…that speaks beyond race or history….A nation is not just a set of laws. Above all, it is a story: a never-ending story of us….It should speak to our sense of place: our home. It should be a work of poets. It should stand alone, apart from the Constitution….should speak to who we have been and allow for who we may become….should be a song to our country.

I read this book for Lisa @ANZLitLovers Indigenous Literature Week.