Over the years I have developed a rather strong love and admiration for both famous Hepburn’s. Katharine for her fierce independence and uncompromising approach to life and love…as well as her wonderful, eclectic movie choices. And Audrey for her style, her big heart and her amazing cast of leading men!

Therefore For Audrey With Love was always going to attract my attention.

The first few pages are a little difficult to follow as the narrative runs two parallel stories until Audrey and Givenchy meet for the first time. The language is a bit stilted and dare I say, inane. The translation was done by Ann de Clercq-Foley, so not sure if the problem lies with her or with the original.

However, it’s the drawings that make this picture book so appealing. They’re fun and oozing panache. It’s a visual feast of fashion rather than a strict factual story; a loving tribute rather than a faithful biography; a pictorial version of fictionalised fiction.

One of the curious spreads was the one above, where the top row depicts other famous women who also enjoyed wearing Givenchy designs, but the bottom row shows Audrey experimenting with other styles, “but everything she tried was stupid“.
Stupid?

I’m not sure if Audrey ever had the need or the opportunity to wear a Dorothy outfit, or Marilyn’s revealing white dress or even Maria’s convent dress from The Sound of Music. Audrey’s My Fair Lady costume was a costume and it suited the purposes of the movie, so I wouldn’t call it stupid either. It was an odd choice of word that sucked some of the intended humour out of the drawings. 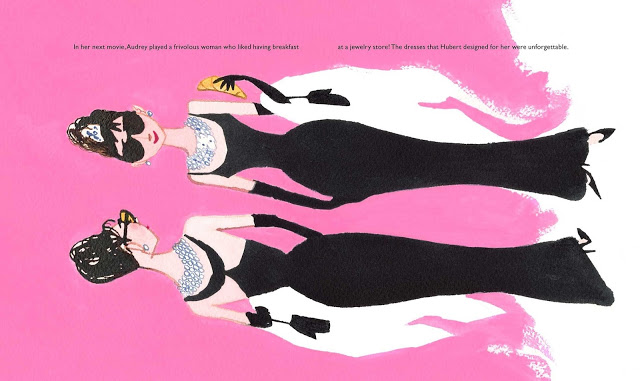 The gorgeous double page spread showing off Audrey’s Breakfast at Tiffany’s outfit is stunning, but sideways! 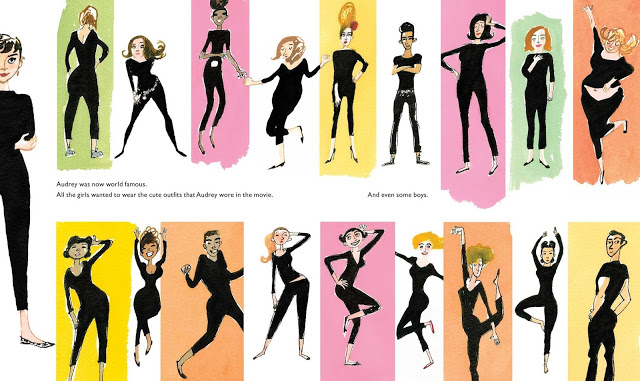 The friendship between the Audrey and Givenchy was something I didn’t know much about…which caused me to google it…as you do!

Givenchy first met his iconic muse, Audrey Hepburn, in 1953, in a romantic twist of fate that rivals any of her films. He had in fact been expecting Katharine as the Mademoiselle Hepburn he was to dress for the forthcoming picture Sabrina. Audrey is said to have arrived in a tied-up T-shirt, tight trousers, sandals and a gondolier’s hat on the day that sparked the beginning of a 40-year friendship.

Givenchy went on to design the actress’ personal ensembles, as well as those made famous by her in timeless films such as Funny Face, Sabrina, and of course Breakfast
at Tiffany’s.”The little black dress is the hardest thing to realise,” he told the Independent in an interview in 2010, “because you must keep it simple.” In the words of Hepburn,
Givenchy to her was more than a couturier, and indeed she to him far more than a muse. Theirs was a relationship not only of professional advantages, as they propelled one another into the royalty of their respective worlds, but one of deep and long-lasting affection, that would continue for more than forty years.

Wikipedia had this to say about their collaboration:

According to Moseley, fashion plays an unusually central role in many of Hepburn’s films, stating that “the costume is not tied to the character, functioning ‘silently’ in the mise-en-scène, but as ‘fashion’ becomes an attraction in the aesthetic in its own right”. Hepburn herself stated that Givenchy “gave me a look, a kind, a silhouette. He has always been the best and he stayed the best. Because he kept the spare style that I love. What is more beautiful than a simple sheath made an extraordinary way in a special fabric, and just two earrings?”

She also became the face of Givenchy’s first perfume, L’Interdit, in 1957.

In addition to her partnership with Givenchy, Hepburn was credited with boosting the sales of Burberry trench coats when she wore one in Breakfast at Tiffany’s, and was associated with Italian footwear brand Tod’s. 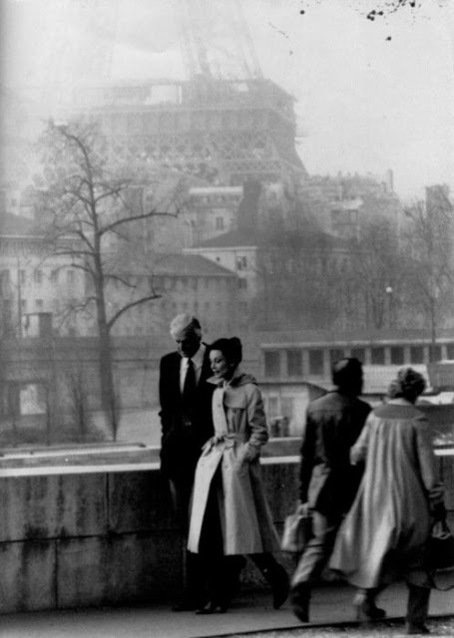 I was unable to find an image source for the above photograph – it was all over the interweb – but a lovely tribute to their friendship was in the Harper Bazaar earlier this year and it featured this photo as well.

For Audrey With Love is a lovely picture book about fashion and friendship. But it is Audrey’s classic beauty, style and grace that shines from every page.

6 thoughts on “For Audrey With Love: Audrey Hepburn and Givenchy by Philip Hopman”