As many of you know, I’m slowly, very slowly, making my way through the Nobel Prize winners. April is poetry month in America, so I thought I would use this opportunity to focus on one of the poets on my Nobel list.

Carl Friedrich Georg Spitteler (24 April 1845 – 29 December 1924) was a Swiss poet who grew up in the area around Basle. He wrote epic, heroic poetry from a pessimistic point of view. He created his own metric system with which to write his poems.

His early working life (1871-79) was spent in Russia and Finland as a tutor to the children of General Standertskjöld. He then described his first foray into the publishing world like this:

I worked on Prometheus und Epimetheus, which, after my return to Switzerland, I published in 1881 at my own expense under the pseudonym Carl Felix Tandem. The book was completely neglected; because it was not even reviewed I abandoned all hope of making poetry my living and was compelled instead to teach school. [1] 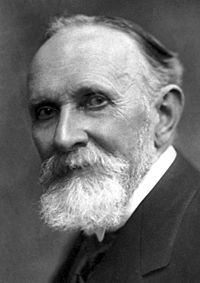 In 1909 he revised Olympic Spring and re-published it in five volumes. It was this edition that brought him wider recognition and praise.
A few years ago Ross @ Ross’ Column posted a number of Spitteler’s poems in English – thank goodness, because trying to find English translations of his work was very difficult indeed. They’re not really my style but I’ve included two of my favourites from Ross’ blog below.

A troop of children scales the ridge, and cries
Challenge to April skies.
“Come on! No fear!”
Hats off! This is not play;
They mean to storm high-heaven today.
It lies so near!
See how, above, it peeps through tall green grasses!

Two silver bell-notes, borne on morning breeze that passes,
Happy and careless, lightly swinging.
Come singing, ringing.
“Where lies our pathway now?”
“Above that little crowd of starry faces,
Over the hill we go
To paths that pearl-white cherry-blossom traces,”
They say – then sing, then soar
To hill, to cherry-blossoms, and are heard no more.

But what of the child-army under?
Oh, they are all gazing in wonder:
“A hedge-hog!” they say –
Heaven’s safe for to-day.

A Shout of Joy

Oh what has changed my thought’s defiant tread
To wing`ed ride on drifting clouds o’erhead?

Is it my view, unfettered and wide,
O’er countryside?
Is it the torrent’s ringing call,
Tumbling through woods from fall to fall?
Is it the peal of sabbath bells
That clear from peaceful valley swells?
Ah, nay!
My joy has fairer feet than they.

Because this truth rings clear,
Love shall be always near;
And woman’s realm, divine, yet lowly,
Is full of wonders holy;
Because my heart, in thirsting hour,
Has thy love for its princely dower.

Arcadian shepherds, simple goat’s milk bearing,
Offered their tribute to the wealthy Croesus.
The monarch, graciously their gift approving,
Sent them in royal litters through his Sardis,
To view its building and its mighty temples,
And all its marvel-works of human cunning.
“Great king,” they cried, quite overcome with wonder
“Who is the craftsman that has this created?”

Straightway the king led to a massive wall,
And bade them knock. No sooner said than done.
“Now listen.” They obeyed. “What hear you there?”
“Wailing and moaning of a myriad voices.”
“You understand?” “Alas, O king, we fail to.”
“That was the craftman,” answered lordly Coesus.

So, now we know a little more about the Nobel Laureate from 1919.
[1] Nobel Prize Biography page.