I finally got around to reading The Green Road thanks to Cathy’s #ReadIreland Month. It has been sitting on my TBR pile since 2016.

Over my years of blogging, I’ve come to realise that writing a rave review about a book I really enjoyed, if not loved and adored, is actually harder to do, than writing about those books that are fine reads but didn’t quite reach the heights of ecstasy or move me into speechlessness. 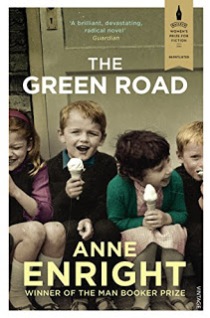 The Green Road was such a wonderful, engaging, poignant read after a bout of books that were fine stories mostly which had failed to move me or delight me. I wonder if it was a coincidence that this bout of books were all written by men? By the end of the Winton, I felt an overwhelming sense of desperation to read a book written by a woman. Either way, I’m left feeling rather bemused about how to write an adequate response that does this glorious book justice.

The story of the Madigan family is a slight story in someway. There is no major crisis or earth shattering family secret. The Madigan’s are just a regular family with the usual (in Irish terms) problems, misconceptions and issues.

We start with a series of stories seen from the perspective of each of the four children, Constance, Dan, Emmet and Hanna. We see the fall out of Dan choosing to leave home (for the priesthood, which causes his mother to take to her bed for a week!) via the baby sister’s eyes. Ten years later we see him again in New York – a failed priest still coming to terms with his sexuality. The other brother makes his way to Africa as a UNICEF field worker whilst the eldest daughter has stayed in Ireland, married well, had a clutch of children and is battling with her weight. We cycle back to see Hanna, now all grown up, not quite making it as an actor, with a baby of her own and an alcohol problem.

Each of these chapters could almost be a story in their own right. Enright has the ability to weave a sense of place into each chapter so thoroughly, that shifting onto the next one is a little jarring at the start. Ardeevin, County Clare is vividly drawn, as too is AIDS ravaged New York and the hardships of Segou, Mali. Each sibling has attempted to find their own place in the world, their own sense of purpose, all the while their mother’s voice and their childhood angst rings in their ears.

Their tale is the usual family tale of coming to terms with the image of your mother as you experienced her as a child, against the mother you wished she had been with the woman she really is. Rosaleen is annoying, at times manipulative and perhaps not quite grown up and at peace with her childhood. In other words, she’s a regular woman trying to deal (or not) with her own issues as she brings up a family.

Enright writes with compassion, humour and insight. Like real life, nothing is wrapped up in a tidy bow, for the simple reason that the story goes on. One way or another, we always go on.

The second half of the book centres around Christmas 2005, when all the siblings come home together for the first time in a very long time. The catalyst? Their mother has just declared she is ready to sell the family home. And the Green Road of the title? It’s a local road that leads through the fields of County Clare to the beach,

This road turned into the green road that went across the Burren, high above the beach at Fanore, and this was the most beautiful road in the world, bar none, her granny said -famed in song and story – the rocks gathering briefly into walls before lapsing back into field, the little stony pastures whose flowers were sweet and rare.

6 thoughts on “The Green Road by Anne Enright”