Skip to content
I’ve had a peculiar day.
People have been sharing their tales of woe and weirdness with me all day.
Acquaintances, not quite strangers on the street, but close enough, sharing intimate, private details with me. I’ve been hugging people left, right and centre and listening to the most extraordinary stories.
All of this weirdness got me thinking about the Ides of March.
The day that Julius Caesar was assassinated in 44 BC.
It was obviously a very weird day for Caesar and the Roman Republic as well. 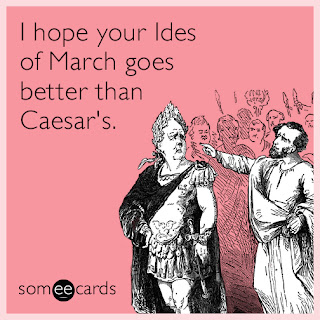 A major turning point in history, in fact.
Where Rome moved from being a Republic (albeit a Republic fraught with internal tensions) to a fully fledged Imperial Empire by 27 BC.
A period of civil war, executions and unrest followed Caesar’s death, until his great-nephew and adopted son Octavius was able to consolidate his power base and take control.
500 years of the Roman Republic over, just like that.
In a blink of an eye.
Change has been on my mind a lot lately.
The passing of time, the march of generations, yet the continuity and sameness of it all.
Things that once seemed so important and necessary and definite have faded, been forgotten.
Other ideas and feelings have become the important things to hold on to.
Yet these too will pass.
All those people, the regular folk, the Plebeians of Rome, spent their days going around doing their daily thing. Working, eating, spending time with family. Worrying if they had enough food, frightened when someone got sick, hoping that all those people running around trying to rule Rome didn’t muck things up too much.
Just like us.
All their fears, loves, dreams, hopes and concerns are now nothing to us.
They were important to them at the time, just like ours are to us, but one day they will all be gone too.
Empires, republics and nations come and go.
Just like us.
Rulers, leaders, dictators and tyrants come and go.
Just like us.
One day, this time will be but a blink in the eye of history.
Our stories will have disappeared as too our fears, loves, dreams, hopes and concerns.
Why hold on to the shitty stuff?
Let it go.
If all we’ve got is this brief time, this brief, always changing time, then why not hold onto the good stuff?
Honour our sorrows, not wallow.
Learn from our trials and tribulations, not ignore.
Acknowledge our fears, then laugh at them.
Hold on to all that is good.
Fight for kindness, peace and safety.
Revel in love, beauty and hope.
Let go of all that is holding you back.

3 thoughts on “The Ides of March”