Skip to content
I Married You For Happiness by Lily Tuck was a bit of an impulse read one grey, rainy work day. It’s slim form meant it could slip inside my coat pocket and come along to lunch with me.
I quickly realised that having happiness in the title was a misnomer as this was yet another book about death and loss and grief.
I have read so many books about dying and sorrow in the past year or so. I’m not sure if it’s just me and where my interests are leading me right now, or if it’s a wider bookworld theme.
Considering that I Married You For Happiness was first published in 2011, I have to assume it’s me seeking out/being attracted to this theme at the moment. 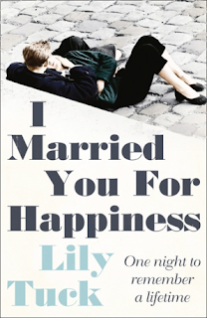 A quotation from Blaise Pascal acts as epigraph for the story,

We never keep to the present. We recall the past; we anticipate the future as if we found it too slow in coming and were trying to hurry it up, or we recall the past as if to stay its too rapid flight. We are so unwise that we wander about in times that do not belong to us…

Which sets the scene for this bitter sweet story beautifully.

Philip and Nina’s history is told over the course of one night.
It’s the night that Philip has died in his sleep after having a little lie down after work and just before dinner. Nina sits, shocked, with Philip’s body, and throughout the long night, she remembers some of the moments that made their marriage what it was – their first meeting in Paris, the birth of their daughter, Philip’s career as a mathematician, the flirtations, arguments and counselling, the jealousy, the secrets and, of course, their love, that endured it all.

Philip was a mathematician, so quite a lot of probability and philosophy was thrown into the mix. His rational nature often clashed with Nina’s more artistic soul and their marriage, like most, I guess, became a compromise and dance around each other’s emotional abilities and needs.

Tuck throws in the occasional harsh reality check – like Nina suddenly remembering a story about an elderly local woman who was brutally raped when her home was broken into, who subsequently died, not so much from the pain, but the shame.

This is where Tuck excelled. She showed us the complicated and sometimes random nature of grief. Weird trivial thoughts and practical matters often interrupted and intruded on Nina’s ability to process what had happened. The reality of her loss would hit her anew, as another memory led her back to this present moment. And then off again.

Tuck used a fragmentary style of writing which suited the in and out, to and fro nature of Nina’s thoughts. The writing was sparse yet delicate as Tuck explored the age-old tragedy of how one partner will eventually predecease the other in any marriage. And that even though we all know this harsh fact right from the start, it still catches us by surprise when it actually happens.

The only really weird moment for me, the reader, was the ending. Was it all a dream? Or did Nina create a fantasy to sustain herself in her grief? Given that her favourite painting was Caravaggio’s Rest on the Flight into Egypt, the reference to an angel with black wings is perhaps not so surprising, and could be seen as a sign of comfort and solace seeking in her time of need.

Seeking comfort is one of the essential strategies we all need to develop to distract ourselves from our grief. We will never erase or forget our emotional memories, and closure is a myth, but we can plan for and soothe ourselves when those intense emotions and memories are triggered.

Perhaps that’s what Tuck was trying to tell us all along – that we all have the ability to comfort ourselves when the time comes.

If you enjoyed Kent Haruf’s Our Souls At Night, Tinkers by Paul Harding or Chesil Beach by Ian McEwan you might also enjoy this.

4 thoughts on “I Married You For Happiness by Lily Tuck”