I have yet to read Turgenev’s First Love, so I cannot assess the claim made by Alan Warner on the back cover of my edition of Gwendoline Riley’s First Love that they are not too far apart. According to Warner they have ‘the same panoptic, all-too-human lurches, afflictions and doubts, gorgeously exposed.’ 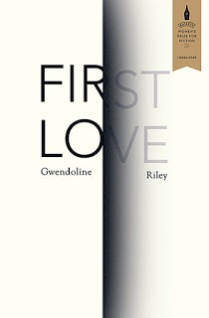 I’m not sure how ‘all-seeing’ and ‘all-too-human’ Neve’s story is. But for anyone who has found themselves in an unsavoury, bullying relationship, this story would contain many truths.

Fortunately I’ve only ever witnessed bullying relationships from afar, but Neve’s story made me feel so claustrophobic and so caught up in the drama of her stumbling from one poor choice to another, that I felt like I was intimately involved in the dysfunction.

Riley deftly draws the line between adult Neve’s unhealthy relationships to those between her parents and the way they parented her and her brother. Edwyn’s life is less exposed, but we are given enough clues to see that he also suffered from poor parenting and relationship models. He is the classic case of someone who is only able to see the world through his own lens. Everything he throws at Neve verbally and accuses her of is actually an insight into his own thoughts and feelings.

There were times when I wanted to shake Neve out of her complacency and learned helplessness. It was frustrating to see so little personal growth and awareness in a character. By the end, it felt like she would always be nothing more than the product of her environment and upbringing.

I’m not sure if that’s the lesson Riley wanted us to get from her novel. That the individual is doomed to live out the mistakes that their childhood inflicted on them seems terribly sad and fatalistic. But maybe free-will, self-responsibility and choice is only something that those lucky enough to have a safe and loving upbringing can claim?

First Love was provocative and challenging at times, but it wasn’t really a ‘story of love‘ like the blurb suggested. It was more like people searching for their idea of love, but not being capable of recognising it or participating in it in a healthy way.

I’m not sure why this book was shortlisted for the Baileys Women’s Prize this year. Yes, it has some fine writing, but Neve’s stuck-ness and despair was never overcome and I ultimately felt let down by the ending that resolved nothing and allowed no-one to move forward. I still have no idea why Neve chooses to stay with Edwyn, except for the usual psychological reasons that any abused person chooses to stay with their abuser. But it’s not love, no matter how they dress it up.

For another point of view about this book try Simon@SavidgeReads (who might help you see some layers that I didn’t) and My Booking Great Blog.