Usually I prefer to start a book knowing as little about it as possible, especially contemporary fiction. I like to come at it without any prejudices or preconceived ideas so that I can make up my own mind.

However that was not the case with the Stella Prize winning book The Museum of Modern Love by Heather Rose. 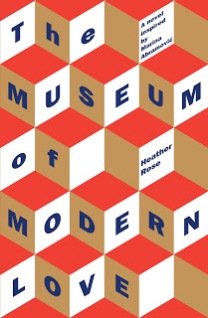 Based on nothing but the cover and it’s shortlisting for the Stella, I had decided that I would probably give this book a go one day when I felt like a bit of love mixed with art. The tag ‘a novel inspired by Marina Abramović‘ rang no bells at the time except to tell me that this story would be based on someone’s real life.

But then I read Kim @readingmatters review, which lead me to Lisa @ANZlitlovers and Kate @booksaremyfavouriteandbest and I realised very quickly that I did indeed know who Marina Abramović was.

And knowing that moved The Museum of Modern Love straight to the top of my TBR pile.

A while back I had seen Ulay’s video as it made it’s rounds on social media. Ulay was Abramović’s former partner.

I have been haunted by the old lover’s reuniting scenario in this video ever since – the look in Marina’s eyes and the whole concept behind the staging of the Artist is Present (2010) exhibition fascinated me.

Having watched this (and several others about Marina’s show since) I do now wonder about Ulay’s song that plays over this video. It feels a little like Marina’s performance has been usurped by his agenda (there is another youtube video of this meeting available that Abramović’s team produced as well). But that’s an another story….

After reading Kim. Kate & Lisa’s reviews I found an archival documentary by Nicola Flint (below) and read this article in The Guardian about Abramović’s 2014 exhibition at The Serpentine Gallery in London.

As you can see I became fascinated (okay obsessed) very quickly…and I hadn’t even opened the book at this point!

I had very high expectations for this book and it didn’t disappoint, although it wasn’t exactly what I thought it would be either. By the end though, I had no idea how I could possibly review it any better or more succinctly than Kim, Lisa & Kate had done before me.

It was the art that stood out for me though.

There were so many discussions by the characters about various exhibitions and modern artists that I had no idea about. With each one, I felt the need to google and find out more. This on-the-side research added a great deal of aesthetic and intellectual pleasure to my reading experience.

Reading and researching The Museum of Modern Love became my very own personal art therapy session.

Early on in the novel, Jane Miller (a visitor to New York) on her way to MoMA to see Abramovic’s performance, looked up and caught

sight of the silhouette of a man standing high on the edge of a nearby building. She had squinted, puzzled, ready to be alarmed. But then with a thrill she recognised it as one of the Antony Gormley sculptures dotting New York’s skyline through spring.

Rather spooky isn’t it?
Antony Gormley has now (re)created several Event Horizon shows around the world including the original in London in 2007, New York in 2010 and Hongkong in 2015/6.

Yes, Jane, I think so too.
I know that it saves me on a regular, almost, daily basis.

(She) thought instead of Gustav Metzger. Metzger liked to drape cloths over things. He had draped cloth over images of the Holocaust. He might drop a cloth right over Marina Abramović.

Sadly, when I googled Metzer for this post, I discovered that he had died just last month at the age of 90. The idea of what can be seen, what is hidden, who is doing the looking and who is hiding were themes that Rose played with throughout the story.

Jane, again (she was an art teacher which explains her interest and knowledge. Rose used her very effectively to provide the reader with relevant information and as a gentle provocateur):

Brancusi, the sculptor, for thirty years or more, worked exclusively with two forms – the circle and the square. Every sculpture was a marriage of the egg and the cube….I think Abramović probably has the same thing in mind. She’s asking us to look at things differently. Maybe to feel something invisible….she’s always been exploring either intense movement or utter stillness.

Keeble (a TV art critic, and a not so gentle provocateur):

‘For several centuries now art has sat beside religion,’ he said. “When we get overlap we get outrage. Take The Black Madonna. Piss Christ. Wim Delvoye tattooing the Madonna onto a pig’s back. I’m uncomfortable with how religious it feels to walk into MoMA right now and see all those people literally kneeling or sitting about and staring at Abramović  as if she was a saint.’

The novelist, Colm Toibin sat with Marina in real life and in the book. He wrote about it in The New York Review of Books. Rose’s ability to weave together the real and the fictional was flawless.

Books also got mentioned by our characters – Muriel Barbery’s, The Elegance of the Hedgehog and 1Q84 by Murakami. One I’ve read and one I haven’t – but it is on my TBR pile. I love books that lead me to other books.

There were so many rich layers and ideas about art, life and love interwoven throughout this gorgeous story that, when I finished, it moved straight onto my To Be ReRead Pile.

Connection and convergence were major themes that resonated strongly with me…not only within the book, but with other real life stuff as well.

It felt like The Museum of Modern Love has now led me naturally, like stepping stones named art, New York and love straight into the arms of Mohsin Hamid’s Exit West, Bill Hayes’ Insomniac City and now Siri Hustvedt’s What I Loved.

Synchronicity and convergence and connection at work on my bookshelves!

I have also been thinking (a lot) about how these things also play out it in our day to day lives.

Perhaps some of the highest praise I can give Rose’s book is that it has not only opened up my mind, heart and world to modern art and the idea of art as therapy, but it has also inspired and informed my subsequent reading.

The other review for The Museum of Modern Love that I wanted to highlight was Heather’s @Bits and Books.

Sadly, Heather Croxon died after being involved in an accident in early March.
I only knew Heather via her blog, Bits and Books and her instagram, litzy & twitter feeds, but the news gutted me when I first heard about it.

Her enthusiasm for books, the reading community and her budgie knew no bounds. I loved the time and effort she took to create beautifully styled book pics and I always enjoyed seeing her latest book recommendations and links for #6degrees and #TopTenTuesday.

I cannot imagine what Heather’s family must be going through now, but if they somehow wander onto this post, I would like them to know how much fun and creativity Heather added to the book blogging world. She will be missed.
Heather was only 31.

Thank you also to Julianne and Andi @Dewey’s 24hr Readathon for honouring Heather’s memory in their recent post.

6 thoughts on “The Museum of Modern Love by Heather Rose”