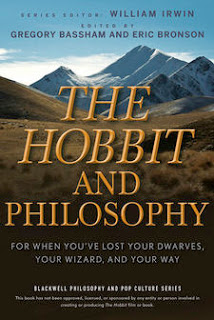 The Hobbit and Philosophy: For When You’ve Lost Your Dwarves, Your Wizard, and Your Way is part of the Blackwell Philosophy and Pop Culture series.

Many, many years ago I discovered the Tao of Pooh by Benjamin Hoff, which is when I realised that it was possible to explain ancient philosophy through the lens of popular literature and culture. It was fun, enlightening and thought-provoking.

Therefore, I was very open, to exploring The Hobbit in the same vain.

There was a lot to ponder as the various authors expounded on the issues of wisdom, the nature of Tao, enlightenment, suffering, mercy, glory, pride, materialism & greed, war, beauty, play, magic, pity, interpretation, luck, consolation, courage, risk-taking and the idea of homecoming.

Some of the essays were drier than others, but most of them were engaging and insightful looks at the various moral lessons embedded within The Hobbit.

We go from Plato’s allegory of the cave which taught us (& Bilbo) to be adventurous, get out of your comfort zone, admit your limitations and be open to new ideas and higher truths. All the way through to the Romantics and the loss of innocence with its inherent melancholy and nostalgia.

Many of the authors found that events in The Hobbit foreshadowed those to come in the LOTR (which I will refrain from mentioning here to avoid any spoilers).

I had an ah-ha moment about why I love Beorn so much – he is, in fact, the essence of the Buddhist ’empty-mind’ or ‘the mind without mind’ theory. He is true to his nature and lives in harmony with all living things. He doesn’t judge others, and like Gandalf, he is an example of the great philosophising walker.

Bilbo is considered from all angles – his journey is seen as a one in a long line of historic religious transformation through great walks. He never forgets who he is or where he is from. He begins the journey in quite a provincial frame of mind, but finishes as a cosmopolitan man of the world. He has shared suffering and he has learnt that you don’t need to be in complete agreement with those you are friends with. You get used to each other, you accept & tolerate and eventually appreciate & respect your differences.

Bilbo is found to be morally and spiritually healthy thanks to his love of natural beauty and his ability to be playful. The reason we feel such an emotional connection to him, is thanks to Tolkien’s ability to make us half-believe that Bilbo really exists. And we all feel Bilbo’s growing pains – the hard lessons he learns along the way and the price he (and we) all pay for growing up.

We cannot be both ‘there’ and ‘back’ at the same time.

Although I am not one of those ‘reluctant adults’ who rail against ‘adulting’ (when did that become a word?) I still succumb to the nostalgia that invades the end of The Hobbit.
We’re meant to. Things have changed. We can never go back to the same place we left.
Yes, we can feel some regret, some nostalgia, some loss of innocence of simple pleasures, but we move on, knowing that we are stronger and braver than we were before. That we can do things and know stuff that we couldn’t do or know before.

Being an adult is great!

However, I can feel myself about to veer off onto a non-Hobbit related rant…!

The Hobbit and Philosophy was a fun easy read that complemented my reread of The Hobbit perfectly. If you’re looking for some extra insight into real life as well as Middle Earth then this is the book for you.