The Invention of Nature: The Adventures of Alexander Von Humboldt The Lost Hero of Science has been on my radar ever since it first came out in 2015.

But it was our forthcoming trip to Cuba that brought it front and centre. There is a national park near Baracoa, in eastern Cuba that is named after Humboldt that we hope to visit. I wanted to know what on earth Humboldt was doing in Cuba.

It turned out that Humboldt was an extraordinary scientific adventurer who had a profound and lasting effect on the way we view the world, nature and the place of humans to this day.

In her prologue, Wulf mentioned that

the irony is that Humboldt’s views have become so self-evident that we have largely forgotten the man behind them.

Her book set out to reveal the forgotten man, follow the web of his influence as well as remind us of all that he achieved during his lifetime.

The chapters that detailed his influence on men like Simon Bolivar, Charles Darwin, Henry David Thoreau, Ernst Haeckle, George Perkins Marsh and John Muir felt like an intrusion at first.
I didn’t feel that we needed these bio’s within a bio, but as each one wore on, I found myself caught up in what these men also achieved and how far-reaching Humboldt’s influence actually was.

Below are some of the basic facts about Humboldt’s life, with a few of his observations and theories that I gleaned from this very accessible, easy to read and enjoyable homage. 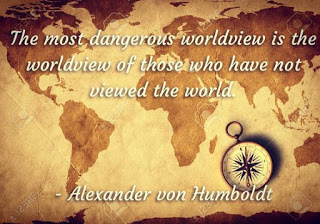 Humboldt was friends with, sponsored or mentored almost every well-known scientist that was alive during his lifetime. He was courted by presidents, royal families and artists. He wrote thousands of letter every year and read thousands more.

Wulf’s biography has been thoughtfully arranged, with a few gorgeous coloured plates, extensive notes (at the back of the book where they don’t clutter up the narrative) and an inspiring bibliography.

One of Humboldt’s strengths was his ability to make science and the wonder of nature accessible to everyone. Wulf has replicated this strength in her award winning biography.

Along with ‘Humboldt’s disciples, and their disciples in turn, (Wulf has) carried his legacy forward.’ (pg 336)

9 thoughts on “The Invention of Nature by Andrea Wulf”