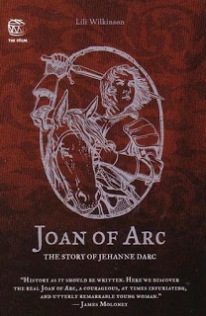 I haven’t read anything about Joan since I studied George Bernard Shaw’s Saint Joan for my HSC. I’m now tempted to reread the play as well as search out any other stories that fictionalise her life.

The facts that did exist about Joan’s life are scarce and sometimes conflicting. They are now also so clouded in all sorts of religious mystery and fervour that the real Joan will probably never be fully realised ever again.

But that’s part of what makes her story so fascinating generation after generation.

How did a poor, uneducated young girl from the country command her king’s attention and then lead her country’s army into battle against the English?

After reading Wilkinson’s Joan of Arc I still don’t really know the answer to that question.

But I’m not sure we ever will.

There are simply not enough primary sources.

Jehanne couldn’t read or write and therefore left no personal journal or letters. Most of the testimony given by family and friends was done so twenty years after she died. Twenty years during which the facts of her real life could be revised and edited to fit into the rehabilitation process. Let alone what happened to the facts four hundred years later when the church decided to beatify her on the road to becoming a saint!

At the end of her fascinating, well researched bio for young people, Wilkinson says,

The extent of her involvement in the strategy and implementation of the battles is something that is hotly debated amongst historians. But the one thing they all agree on is that Joan inspired people. She inspired the French to fight back, when hope seemed lost.

How and why she did this may be obscured for all eternity.

One of Wilkinson’s primary sources was the translated verbatim report on the proceedings of Joan’s 1431 trial. This is available from the International Joan of Arc Society along with other links to papers and earlier works.

Have you read any other historical books about Joan that attempt to reveal her real life? I’d love to know where to continue my journey.

Louise @ A Strong Belief in Wicker listened to the audio version of this book here.

4 thoughts on “Joan of Arc: The Story of Jehanne Darc by Lili Wilkinson”