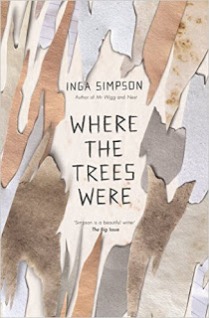 One of my good friends has adored Inga Simpson’s previous two books, Nest and Mr Wigg, so when Simpson’s third book hit the stands recently, I knew it was time for me to see what it was that Anne loved so much about Simpson’s writing.

Where the Trees Were appealed to me for lots of different reasons.

First up the stunning, bark-inspired cover created by Allison Colpoys – love it!

Secondly, the childhood section of this book is set in the Lachlan Valley – which is also where Simpson grew up near Grenfell – and where I spent my teenage years in Cowra.

Most of my friends lived on farms, riding bikes, herding sheep, catching the bus in for school every day, just like the characters in the book. One of my friend’s even had a spot on her farm where we could occasionally spot a platypus in the creek.

Everything rang true, even down to the part about the boys leaving school in Year 10 to help out on the family farm, the tragic car accident that happened in every year in a rural school and all the clever science kids heading off to ANU for their tertiary studies.

I realised that Ambelin Kwaymullina’s comment “to find yourself in story is the right of every child” is also the right of every adult.  I was ridiculously excited to read a story set in my own backyard and to see so many of my childhood experiences reflected in Where the Trees Were.

The alternating chapters that featured the adult story were set in Canberra. The childhood wrongs were gradually revealed through adult eyes. Subtle layers of meaning were peeled back. Indigenous land rights, burial grounds and environmental concerns were explored.

I learnt a lot about arborglyphs (burial trees), sadly a topic that I had never heard about before.

Simpson also teased us with some tantalising information relating to her next project – a history of Australian nature writers – as her protagonist, Jayne, uncovered some 19th century native flower artwork.

The only jarring note was the alternating chapter switch between first person and third person narrative. There were many times in the grown-up chapters when I wasn’t sure who was talking, Jayne, or her partner Sarah. But perhaps I wasn’t paying close enough attention.

Overall, a satisfying, intelligent work that has inspired me to seek out Simpson’s previous two novels.