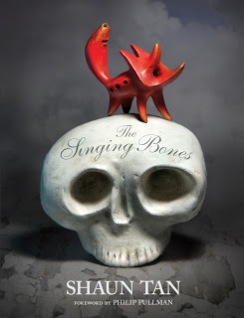 Phillip Pullman tries to in his Foreword of The Singing Bones –

Fairy tale characters have very little character, only characteristics. They have no interior life at all. These little figures of clay, with their simplified features, their single attributes, are perfect realisations of the strangeness of the characters they represent.

Jack Zipes discusses the power they had over him in his essay also in The Singing Bones, called ‘How the Brothers Grimm Made their Way into the World‘.

And in the Afterword, Tan himself, comments on his choice of materials and how they were inspired by a visit to Canada and Mexico where he searched out Inuit stone-carvings and pre-Colombian clay figurines.

These exhibit a wonderful blend of whimsy and seriousness, and a well-considered marriage of earthy material – stone and clay that never pretend to be anything but stone and clay – infused with weightless and magical ideas.

These sculptures affected me at a very basic, subconscious level.
Some made me catch my breath. Others were like a sucker punch to the gut. A few more melted my heart. A couple broke it again.

Their power comes not only from the nature of the sculpture, but from the photographic styling as well. Tan has carefully set up each sculpture with its own lighting, background and angles which creates added drama and tension.

Their seeming simplicity hides layers of meaning. Like the fairy tales they represent different ones will resonate with different people for different & very personal reasons. I’ve highlighted a few of the ones that captured my imagination.

I would have loved to have seen the exhibition in Melbourne featuring Tan’s work. But, sadly, it is now finished and doesn’t appear to be travelling the countryside.

We will have to make do with checking out Tan’s blog, The Bird King, instead.