It’s that time of year again when our favourite books are categorised, judged and pitted against each other for first place.

In Australia we have…

• All the Birds, Singing – Evie Wyld

The Stella has now been whittled down to 6 (those highlighted in red with an *) with the winner to be announced on the 29th April.

The Miles Franklin Longlist was announced this week with some familiar names….

The Life and Loves of Lena Gaunt – Tracy Farr
The Narrow Road to the Deep North – Richard Flanagan
The Railwayman’s Wife – Ashley Hay
Mullumbimby – Melissa Lucashenko
The Night Guest – Fiona McFarlane
Belomor – Nicolas Rothwell
Game – Trevor Shearston
My Beautiful Enemy – Cory Taylor
Eyrie – Tim Winton
The Swan Book – Alexis Wright
All the Birds, Singing – Evie Wyld
The shortlist will be announced on the 15th May and the overall winner on the 26th June.

It’s a HUGE list and covers lots of different categories like poetry, non-fiction, new writing, scriptwriting, playwriting and multicultural writing. Today I will simply share the fiction and children’s shortlists and if you would like to see the rest, please click here.

The Narrow Road to the Deep North, Richard Flanagan

My Life as an Alphabet, Barry Jonsberg

And in the UK, the formerly known as Orange but now known as Baileys Women’s Prize for Fiction have published their long and shortlists with the winner to be announced on 4th June. 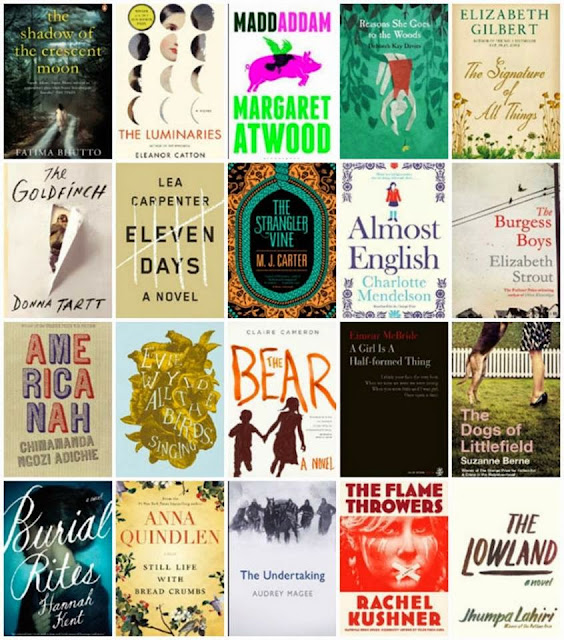 Suzanne Berne – The Dogs of Littlefield

Fatima Bhutto – The Shadow of the Crescent Moon

Deborah Kay Davies – Reasons She Goes to the Woods

Elizabeth Gilbert – The Signature of All Things

*Eimear McBride – A Girl Is A Half-Formed Thing

Evie Wyld – All The Birds, Singing

I’m beginning to think I’m the only person in Australia who hasn’t got around to reading Burial Rites yet. I’ve flicked through it and it looks promising, but it’s hard to get excited about a book that already has so much excitement surrounding it!

The Australian/Vogel shortlist also comes out this weekend with the winner to be announced on the 22nd April.

Books highlighted in purple/green are linked back to my reviews on this blog.

Which ones have you already read and loved (or not, as the case may be)?

2 thoughts on “Longlists and Shortlists.”