Skip to content
I loved the cover of Birthmarked as soon as I saw it – and in this case – you can judge a book by its cover!
Gaia lives in a future world scarred by the climate changes caused by the previous peoples. A world where your future is decided by whether you live inside the walls of the enclave or outside it. Those on the inside lead a life of privilege and ease. Outside is poverty, sacrifice and hard-work. 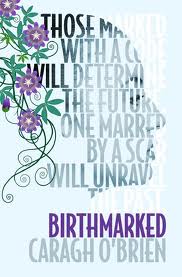 Gaia lives on the outside. And one night she comes home from her work as a midwife to find that her parents have been taken away.

Gaia sets out to unravel the mystery of their disappearance. A journey that becomes more dangerous as she delves into things that  the people in power want to keep secret – at any cost. And of course there is the obligatory love interest just to keep things sweet!

I couldn’t put this book down. Imagine my delight when I recently discovered that book 2 ‘Prized’ is due out November 2011 and that O’Brien plans to write a third (check out the web link below).

If you loved ‘Hunger Games’, then you should enjoy this one too.

In the future, in a world baked dry by the harsh sun, there are those who live inside the walled Enclave and those, like sixteen-year-old Gaia Stone, who live outside. Following in her mother’s footsteps Gaia has become a midwife, delivering babies in the world outside the wall and handing a quota over to be “advanced” into the privileged society of the Enclave. Gaia has always believed this is her duty, until the night her mother and father are arrested by the very people they so loyally serve. Now Gaia is forced to question everything she has been taught, but her choice is simple: enter the world of the Enclave to rescue her parents, or die trying.